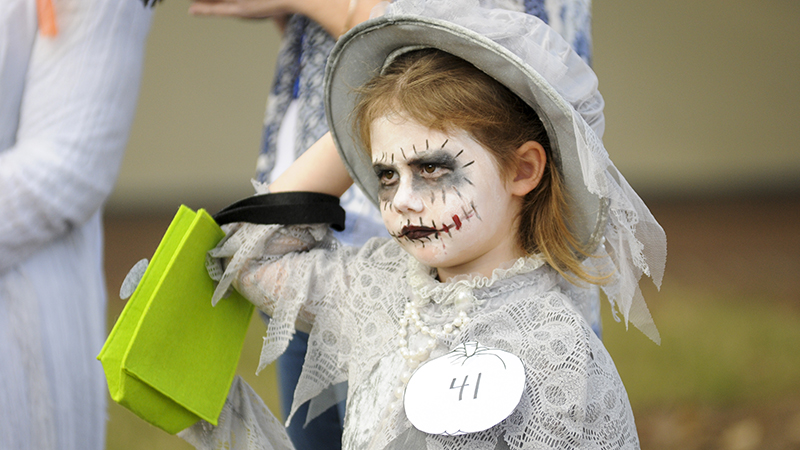 A parade of monsters, superheroes and princesses marched up and down Broad Street Tuesday afternoon for the annual Monster March.

The march, which is organized by Main Street Selma, started at the Selma-Dallas County Public Library where trick-or-treaters signed up for the Halloween costume contest, had their faces painted and created arts and crafts.

“We have been doing the Monster March for 30 years, and each year it just gets better and better because people just have a wonderful time,” said library director Becky Nichols.

“It’s wonderful too to see downtown Selma so full. We stood here this afternoon and watched all the kids walk downtown, and it just looked so fun and exciting.”

The little monsters were led down Broad Street by the Selma High School drum line as downtown businesses handed out candy and complimented the children on their costumes.

They were dressed as Marshall from Paw Patrol, a shooting star, Spiderman, Superman, Batman and Wonder Woman, Teenage Mutant Ninja Turtles, a ladybug and even a chicken.

Nichols said she enjoyed seeing the creativity many of the children had in making their own costumes.

After the monsters filled their buckets with candy, there was a costume contest at the Performing Arts Center on Alabama Avenue.

Emma Ozment won the grand prize for her dead bride costume. Her mother, Emilee, said it was inspired by one of Emma’s favorite movies, Corpse Bride. She said Emma they have been getting ready for Halloween for at least the last month and had a great time Tuesday.

“The kids enjoyed it so much. It was great. It was something sponsored by the city, so we really enjoyed it. We had a good time,” Emilee said. “It’s great to see everybody out and about in the community. It looked like a big turnout too, so that’s a plus.”

“They love it. They were ready before they even went to school this morning,” she said. “We love to see all the kids’ faces when they do get candy. It makes me happy.”

There were so many monsters, many of the downtown businesses ran out of candy by the time it was over.