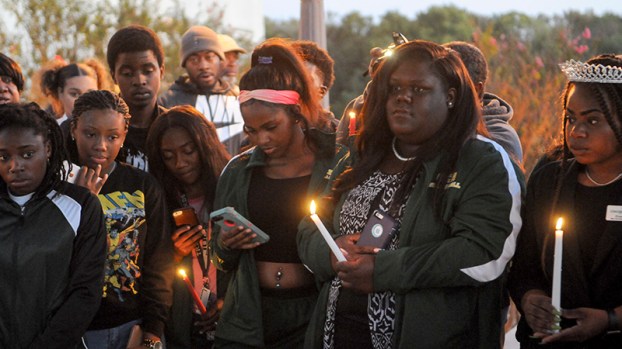 A candlelight vigil was held Wednesday evening in remembrance of Shykereya Leggett. The 20-year-old mother was shot and killed early Sunday morning at an east Selma nightclub.

Dozens of family, friends and community members gathered around a framed photograph of 20-year-old Shykereya Leggett Wednesday night at Songs of Selma Park to pay their respects.

Candles were lined up spelling out “R.I.P. Bluu,” Leggett’s nickname. Leggett, the mother of a 10-month-old son and a student-athlete at Concordia College Alabama, was shot and killed Sunday morning at an east Selma nightclub.

Members of the crowd held candles, as several people spoke about violence in the community and shared memories of Leggett.

Jacoby Gray, a CCA student, said Leggett was like a sister to him.

“We were close. We were like sister and brother,” Gray said Thursday. “I’m going to miss her a lot. There’s not a person that could take her place. Shykereya was just that one of a kind friend for me.”

Gray said he was going to miss hanging out around campus with Leggett and especially going to see her play volleyball.

“There was never a dull moment with Shykereya. She always kept you laughing. She was a fun person to be around,” he said.

Lisa Morenzoni, who taught Leggett geometry at Selma High School when she was a sophomore, attended the vigil Wednesday night as well.

She said the last time she saw Leggett in person was when she was still pregnant with her son, Ethan, who is now around 10 months old.

“She was fixing to pick her brother up because she was checking him out, and he came by and said Kereya was downstairs, so I went to see her,” she said.

“She had her little baby bump, and I affectionately said there is my future grandbaby. They all become your kids even once they’re grown.”

Morenzoni said she had no idea that would be the last time she saw her in person. She said Leggett was always happy in her class and was a very bright student with a strong work ethic.

She said she had kept up with her on Facebook and spoke with her on there from time to time.

“I remember when her baby was born, and she was just so happy,” she said. “You could tell through her Facebook posts that being a mother was just her calling. She loved her little boy.”

Two arrests have been made in a fatal nightclub shooting over the weekend in east Selma. Juantonio Cosby, 30, of... read more