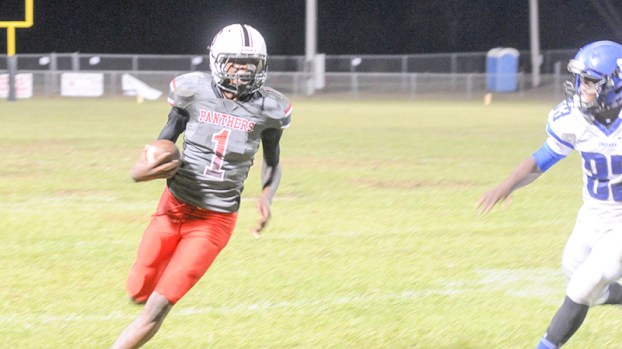 The Southside High School Panthers (6-3) solidified their position at third in the region with a decisive 58-0 win over the Central Coosa Cougars (0-9) on Thursday night in Selma.

The Panthers kept their foot on the gas all night, and sent their seniors off with a bang in their last home game.

The Southside defense earned their first shutout of the year and forced the Cougars to turn the ball over five times. Central Coosa quarterback JaMichael Chambliss threw four interceptions and Donta Daniel also threw one.

“It felt good to see our defense put a goose egg up there, because we needed that,” Southside head coach Daniel Flowers said. “We played a complete game… It was a good team win.”

Panthers defensive backs Ernest Hatcher (2), Kenyon Walker and La’Darius Harrison (2) made the interceptions. Hatcher and Harrison both returned one for touchdowns.

The Southside offense was once again led by an impressive performance by quarterback Malik Johnson. Despite losing a fumble on a strip sack in the team’s first possession, Johnson was able to shake it off and finish the game with 167 rushing yards, 136 passing yards, four passing touchdowns and two rushing touchdowns.

“Malik played awesome, and he did a good job,” Flowers said. “He threw the ball well and ran it well. He controlled the team, and that’s key.”

The Cougars opening possession was going well until Chambliss threw his first interception to Hatcher within his own territory.

“The first drive we looked pretty good, and we just kind of let the wheels fall off and never responded,” Central Coosa head coach Shane Rary said. “We’ve just got to be more physical. We know late in games depth is going to be a problem, but if we don’t start games physical then we’re never going to have a shot.”

Luckily, the Panthers weren’t ready to strike on their first drive as Johnson was stripped of the football on a sack that gave the Cougars decent field position inside the red zone.

Unfortunately, Central Coosa couldn’t take advantage of the situation and turned the ball without getting a single first down. Southside didn’t turn the ball over again for the rest of the night and scored 58 unanswered points.

Johnson’s first touchdown was a 21-yard pass to Derrick Griffin. On his next possession, he ran it himself for a 48-yard touchdown. He converted both two-point attempts.

Flowers wanted the ball as much as possible in the game, but was only one-for-five on onside kick attempts in the ball game. Central Coosa was just unable to take advantage of the good field position.

Halfway through the second quarter, Hatcher extended the lead to 22-0 with the first pick six of the game. Johnson followed that with a 29-yard pass to Keshawn Arrington and a 25-yard pass to Devion Moore on the next drive.

Walker’s interception with 2:48 left in the first half setup the 22-yard pass from Johnson to Arrington to bring the halftime score to 42-0.

“Southside’s got a great, athletic group of guys, and they just happened to be everywhere we wanted to be tonight,” Rary said.

The Panthers kept the pressure on in the second half of the game.

Arrington took his first interception of the game back for a touchdown with 9:25 left in the third quarter.

He would’ve had another pick six on the next possession, but an illegal block in the back call erased the touchdown.

Instead, Johnson ran a 96-yard touchdown on the ensuing drive.

Next week, the Panthers will play their final game of the season on the road against Ellwood Christian Academy (0-7) in Selma.

The Keith High School Bears (5-3) have already clinched a spot in the playoffs, but the final region game of... read more