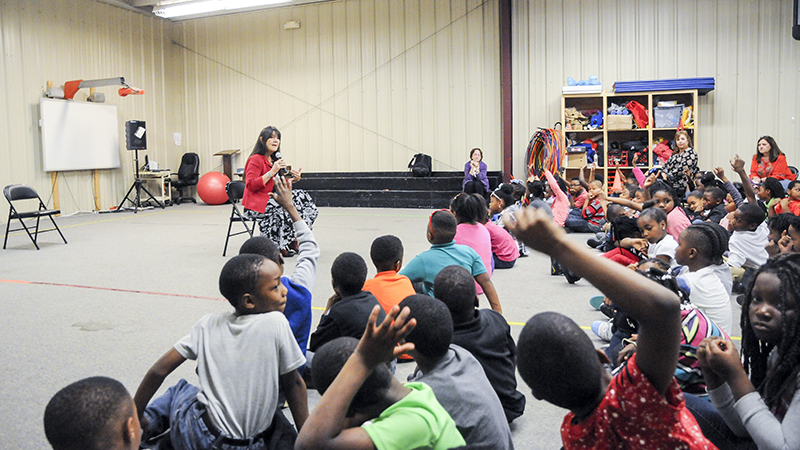 Dovie Thomason performs for Salem Elementary School students on Tuesday afternoon. Thomas is a professional storyteller and in Selma for the annual Kathryn Tucker Windham Alabama Tale Tellin’ Festival, which will take place in downtown Selma on Friday and Saturday evenings.

The students at Brantley Elementary School and Salem Elementary School in Orrville were each treated to an hour of story-telling as a precursor to this weekend’s 39th annual Kathryn Tucker Windham Alabama Tale Tellin’ Festival.

Professional story-teller Dovie Thomason visited both schools Tuesday morning and kept kids entertained with several stories they could relate to.

Thomason was able to hold their attention using the inflections in her voice and interacting with her audience. The students at Salem played along with Thomason, and watched her intently as she told her stories. They laughed at the funny parts and gasped at the surprises.

Salem’s principal Chinita Irby thought it was great for the students to experience this kind of story-telling.

“It’s a great opportunity to have a story-teller to come out and to share word of mouth stories that have been passed down,” Irby said. “It’s not often that our children get a chance to engage in this form of the arts. We do realize the importance of having the arts in education.”

ArtsRevive has been organizing the Tale Tellin’ Festival for the last five or six years, according to executive director Martha Lockett.

“We work really hard to bring in professional story-tellers for citizens and visitors to the city to have an opportunity to hear stories from different cultures, different parts of the country, funny, human stories that show how we are all much more alike than we are different,” Lockett said. “There’s not the strong consistent art programing that most of us would like, so we took this as an opportunity to bring in professional tellers to let the kids to see what a theater person or story-teller could do.”

Brantley and Salem were the first two of the nine performances Thomason will do at local schools before the festival begins on Friday, Oct. 27.

“It’s fun to watch the kid’s response,” Lockett said. “By-and-large, they all really enjoyed the opportunity. It’s not something they get a lot, so we’re glad to do this.”

Thomason enjoyed performing for the students because it’s her way of reaching out to a new audience.

“All of these children and their families won’t be there Friday or Saturday night, but it might be something they seek when these kids have their own cars,” Thomason said. “It’s an exposure to something that wouldn’t exist if it wasn’t brought to them.”

Thomason not only has her own original material for story-telling, but she also continues the oral history of her culture through the stories that were passed down to her. She is a descendent of Lakota and Kiowa Apache Native Americans, and she tells their stories along with her own.

“I did it first because I felt that we were really invisible or misrepresented,” she said. “We need to be seen honestly, not stereotypically.”

The Tale Tellin’ festival is able to continue each year in large part due to the support and funding of the Alabama State Council on the Arts, according to Lockett.

“We’ve got grant funding to do this for the last five years from the Alabama State Council on the Arts and the Black Belt Community Foundation,” she said. “We’re really grateful for that opportunity. Depending on the year and expenses, we put on anywhere from nine to 18 school performances.”

The Tale Tellin’ Festival will be at the Carneal Cultural Arts Center, located on 3 Church Street, with the Swappin’ Ground beginning at 6 p.m. and Tale Tellin’ starting at 7 p.m. on both Friday, Oct. 27 and Saturday Oct. 28.