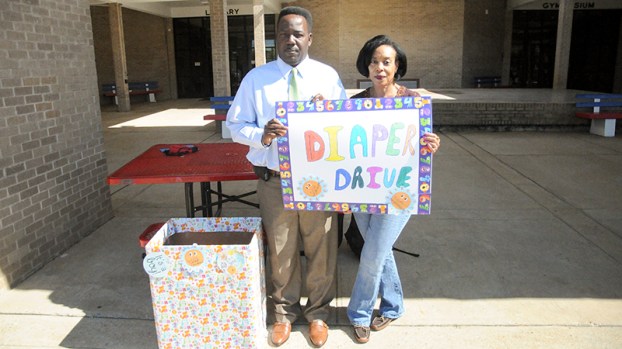 The Wallace Community College Selma SGA and ambassadors are sponsoring a Diaper Drive for Babies as a new community service project.

The diaper drive started Thursday morning outside of the library and the gymnasium. Community drop off days are every Thursday until Nov. 17 from 11:30 a.m. to 1:30 p.m.

Drop-off locations are setup around the school in the Hank Sanders Technology building, the Health Science building, the cafeteria and the Student Center building.

All of the items and donated money will be sent to the Dallas County Health Department.

Priscilla Mitchell, wife of WCCS president James Mitchell, introduced the idea of the diaper drive because she was inspired by a similar effort she read about in a newspaper that distributed over 100,000 diapers in two years.

“It’s just been a vision of mine to do something like that here in Selma-Dallas County,” Mitchell said. “I decided to come to the college and approach the SGA advisor as well as the advisor for the ambassadors to see if it would be a project that they could get their student groups involved in.”

Mitchell has worked with the DCHD off-and-on for the last year or so, and has seen the endless need for more diapers.

“We do have a lot of families who are in need of diapers,” she said. “Sometimes they have to make a decision as to whether or not they’re going to purchase diapers or some other needed item, such as food and what not.”

Keeping up with diapers can be a real strain. Parents need to have enough diapers at home and provide their own if their child is enrolled in a daycare. Babies have to be changed a minimum of eight times a day, so that they don’t get diaper rash and other types of conditions that are uncomfortable for them, according to Mitchell.

“And some families have more than one child in diapers,” she said. “So, that’s why we’re making a big push.”

SGA advisor Corey Bowie felt this was an excellent opportunity for the student leadership to get the WCCS student body involved in a community service project. According to Bowie, he and the ambassador’s advisor, Shuntelra Logan, saw this as a “noteworthy project.”

“It was very alarming to me to find out that one out of three parents can’t afford diapers for their children,” Bowie said. “I felt this project here can help some of the underserved Families.”

A campus-wide e-mail alerting the faculty, staff and students has already gone out to spread the word. They aren’t asking for new born diapers, because infants don’t go to the Dallas County Health Department until they are at least six-months old, according to Mitchell.

However, they will except all other diapers and baby wipes. Donations can be made by check only to the WCCS Foundation, and the check must be marked diaper campaign. The ability to donate isn’t just limited to the WCCS students. The diaper drive is open to anyone in the community who wants to contribute.

“We thought maybe we could involve the community by designating a day, one day a week which happens to be on Thursdays, for the community to do drop-offs,” Mitchell said. “To make it convenient, so they don’t have to worry about the logistics of the campus, we thought it’d just be easier to place ourselves in front of the gymnasium.”

David Oliver and Dave’s Market won the 2017 Bronze Retailer of the Year Award for annual sales between $5 million... read more