Saints host 2017 Battle of the Bands 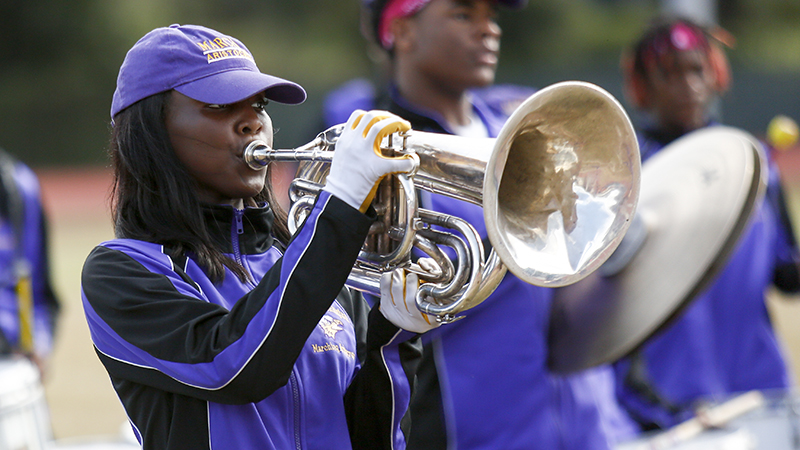 Around 20 bands took the field Saturday at Memorial Stadium for the 2017 Central Alabama Marching Band Festival.

The competition is hosted by Selma High School, and band director Brandon Williams said he couldn’t have asked for a better day.

“The fact that the people came out, the bands are here, people are eating and having a good time … I can’t complain about today at all,” Williams said. “It’s a fantastic turnout to tell you the truth. It’s going a lot better than I had anticipated.”

The battle of the bands is the Saints’ biggest fundraiser of the year, and this year’s is especially important because they are raising money for new uniforms.

The band held fund raisers earlier this year but fell short around $5,000 of their goal. After looking at the stands and the number of people in attendance, Williams said he felt like they would definitely reach that goal.

As one band marched and played, Lydia Hill and the Booker T. Washington High School band waited anxiously over to the side.

“I’m hoping that my students retain all of the changes and critiques we’ve made,” she said.

She said she also hoped her students played with energy.

“That’s one thing we did get a comment on [last week] that the judges liked our high energy. Hopefully, we can pull that off with the crowd,” she said. “Hopefully we can show them something new or something exciting to get them out of their seats.”

Her band competed in a competition last week in Anniston and were hoping to build off of that performance.

“When you’re in a small community a lot of people give you a lot of attention, and you start to think that you’re the best thing around,” she said. “It’s good just to get a humbling experience to see other bands who do the same thing you do.”

Up in the press box, Milton Powell was one of a handful of judges carefully listening and watching as each band performed. Powell is the band director at Northside High School in Tuscaloosa County and has judged this competition several times.

“There’s always a lot of enthusiasm coming here, and it’s good to see that,” he said. “I get to see bands from year to year that have made improvements, and that’s important as a music educator to see things grow and develop.”

As an educator, Powell said he hopes the bands can take something away from this festival and learn from it.

“We hope that they will go back and listen to our comments because as an educator I want to see these groups grow and improve,” he said. “That way, everybody’s program grows. We’re not saying we know all the answers, but we’re seeing things from a different perspective.”

The crowd was also treated with performances from Concordia College Alabama and Alabama State University.