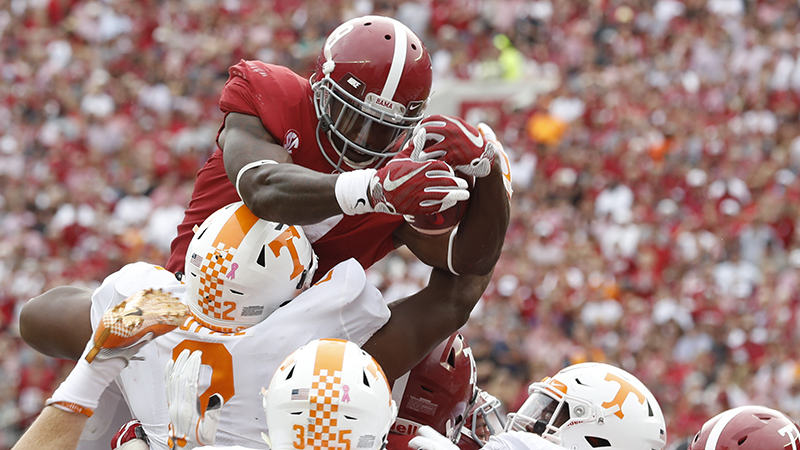 TUSCALOOSA (AP) — Alabama went into halftime up by three touchdowns and not particularly happy.

The top-ranked Crimson Tide was in a better mood after finishing off a 45-7 victory over Tennessee on Saturday, setting off the rivalry’s traditional lighting of celebratory cigars throughout Bryant-Denny Stadium.

Bo Scarbrough had two fourth-down touchdown runs and Alabama (8-0, 5-0 Southeastern Conference) improved to 11-0 in the Third Saturday in October game under coach Nick Saban. Being up “only” 21-0 at halftime didn’t cost the Tide.

“Yeah, we scored 21 points but it wasn’t our type of football,” quarterback Jalen Hurts said. “We kind of turned it up when we came back in the second half.”

The stat sheet indicated it was more of a wire-to-wire domination. Alabama outgained Tennessee 604-108 in total yards even with reserves manning the offensive backfield most of the second half.

The result was another blow to the slumping Volunteers (3-4, 0-4) and embattled coach Butch Jones, who said against ‘Bama “every mistake you make is magnified.”

Alabama, meanwhile, converted twice on fourth down from the 1 with defensive linemen Da’Ron Payne and Quinnen Williams serving as Scarbrough’s lead blockers.

“When the ball’s inside the 1-yard line, I don’t know that there’s ever been a time when we didn’t go for it,” Saban said.

Hurts capped the opening second half drive with a 14-yard touchdown pass to tight end Irv Smith and then watched from the sideline the rest of the way.

The Vols did snap a streak of 12-plus quarters without a touchdown after that move. Linebacker Daniel Bituli intercepted Tua Tagovailoa’s pass and raced 97 yards down the left sideline for a touchdown.

After the play, defensive back Rashaan Gaulden was flagged for unsportsmanlike conduct after flipping a double bird at Alabama’s student section. Gaulden apologized after the game.

“Well that’s unacceptable,” Jones said. “That’s something that will be dealt with internally in our football program, but that’s not who we are, that’s not what we’re about. But he knew that. We spoke about it, and he feels awful about it.”

Tagovailoa added big plays after his own mistake. He scored on a 23-yard run and then hit fellow freshman Henry Ruggs III for a 60-yard touchdown with 4:49 left. Ruggs has five catches this season, all going for scores.

“We stuck with (Tagovailoa) so he could see that we had confidence in him and he continued to play well,” Saban said.

Alabama made a goal-line stand in the fourth quarter with the stands mostly still packed and fans celebrating almost like it was a game-saver. Tennessee helped with a penalty from the 1.

And Alabama was left with something else to celebrate.

Alabama has an open date before hosting No. 24 LSU.