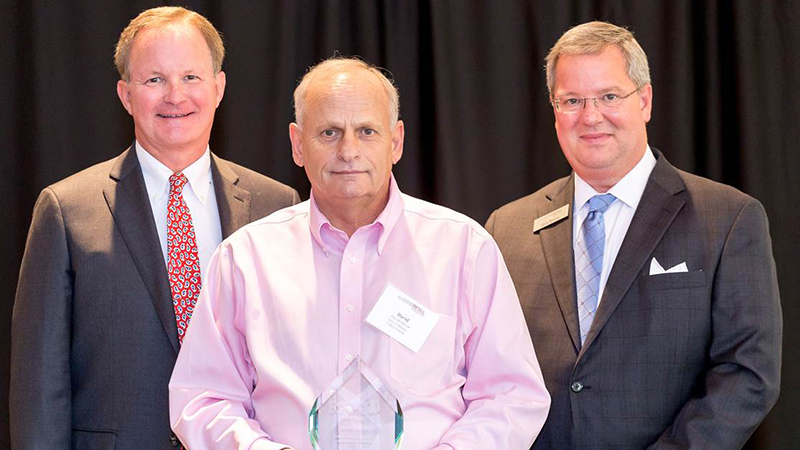 David Oliver and Dave’s Market was named the 2017 Bronze Retailer of the Year in the annual sales $5 million to $20 million category. Shown above from left are Alabama Retail Association Chairman Ricky Bromberg; David Oliver, owner of Dave’s Market; and ARA President Rick Brown.

David Oliver and Dave’s Market won the 2017 Bronze Retailer of the Year Award for annual sales between $5 million and $20 million from the Alabama Retailers Association this past Tuesday at the Vestavia Country Club in Birmingham.

It was Oliver’s first time receiving this award from the Alabama Retailers Association. He took three employees who have been with the business since the beginning to share the moment of accepting the award with him.

“I hope it makes them feel good and as excited as I was,” Oliver said.

More than 90 nominations were submitted for the 2017 Retailer of the Year Awards, and David Oliver Co. LLC, was one of 20 retail businesses from across the state that received an award.

“I don’t know what the criteria was for how they selected, but it seems like to get it, you must be doing a good job,” he said. “You always hope to win, but you didn’t know if you would or not.”

Businesses must be in operation for at least five years in order to be nominated and the competition is stiff, according to Selma and Dallas County Chamber of Commerce executive director Sheryl Smedley.

“We’re in competition with people all over the state of Alabama, and we’re talking about areas where metropolitan areas like in Birmingham and areas in north Alabama,” Smedley said. “It’s very competitive, and it’s hard for a small rural business to be considered in a nomination. What Dave has done is remarkable.”

The Valley Grande location has been open for seven years, and the Thomaston location opened in April 2015, according to Oliver.

“We’re doing over 10 times what we were doing when we first opened up,” Oliver said. “It’s just been climbing every year.”

Only six other businesses with locations in Dallas County have won this award before, but Oliver is the first with a location in Dallas County to win in the $5 million to 20 million category.

“It brings attention to the county and it must be a good place to do business,” Oliver said. “We weren’t working to get it, but it seems like if you work hard you’ll eventually get it.”

The award doesn’t just shine a light on Oliver’s success with his stores, but it also shows that local businesses like Dave’s Market are capable of competing with other businesses across the state.

“It says that Selma and Dallas County is open for business, and it attracts other retailers and small businesses to the area by seeing the success of these businesses located throughout our community,” Smedley said.

4-Hers show chickens at county fair