Still time to sign up for ‘Oktober on the Avenue’ scarecrow, chalk art contest 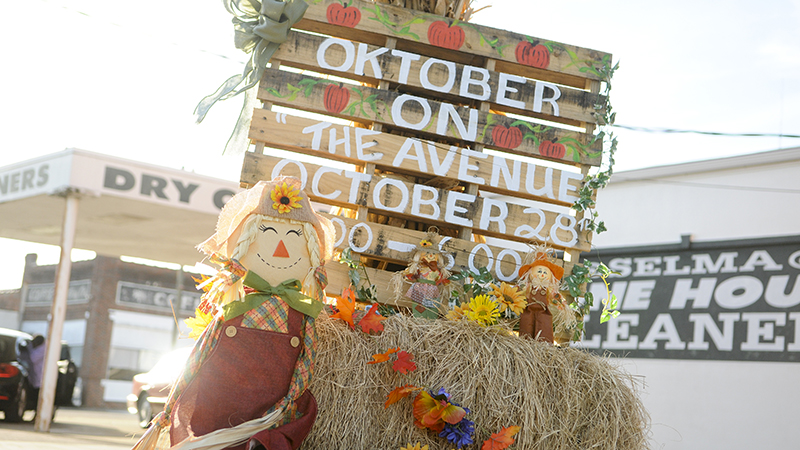 Next Saturday’s “Oktober on the Avenue” will include a scarecrow and chalk art contest on Water Avenue.

With just two days left to sign up for the scarecrow building and the chalk art contests at “Oktober on the Avenue” next weekend, organizers are still looking for people to join the fall fun.

Margie Burk, who has helped organize the event, said they are looking for families, businesses, churches and anyone else interested in getting creative to sign up.

“The concept of this whole thing … was really developed just to bring a positive awareness to Selma, to do something positive for the community with no political or private agenda and also to bring awareness to Water Avenue, which is more than just a street,” Burk said.

Burk said many other cities do scarecrow contests, so she wanted to bring one to Selma.

“To my knowledge it’s never been done here, and the chalk art was just kind of one of those things that popped into our brain, and we thought it would be a great idea, especially for teens to display their talents in a fun way that could be enjoyed by many,” Burk said.

“It’s an interaction because people can actually come and partake in doing that, especially with the scarecrows,” she said. “That can involve families, it can involve teams, people working together and being creative.”

Burk said there are already several entries in both contests, but she is hoping for a total of 15 scarecrows and 10 entries in the chalk art contest.

Bases and hay will be provided for the scarecrow contest, which begins at 10:30 a.m. and ends at 1 p.m.

Teams are asked to check in at 10 a.m. and bring their own decorations, such as hats, overalls, etc. Judging will follow immediately after the contest.

Cash prizes will be awarded for the best scarecrows: $75 for most imaginative, $75 for best traditional and $100 for mayor’s choice.

To sign up, teams are asked to go to the Selma-Dallas County Public Library.

The deadline to enter both contests is Saturday, Oct. 21 by 5 p.m., which is when the library closes.

There is no charge to enter either contest.

The chalk art contest, which has an “All Things Selma” theme, begins at noon and goes until 2:30 p.m. Burk said teams are encourage to draw sites seen around Selma, such as plants and trees, historic homes, buildings or churches and street scenes.

Teams are asked to check in to get their registration number, designated space and chalk at 11:30 a.m. Cash prizes of $100, $75 and $50 will be awarded for first, second and third places.

Scarecrows will be left up in Phoenix Park for two weeks after “Oktober on the Avenue.”

“It’s really just an event for people to come out in the community and enjoy the atmosphere and enjoy Selma,” Burk said.

There will also be food, live music, a costume pet parade, a classic car show and more. Charlie’s Place and Side Porch Sandwiches will be serving German food and drinks as well as their regular menu items.