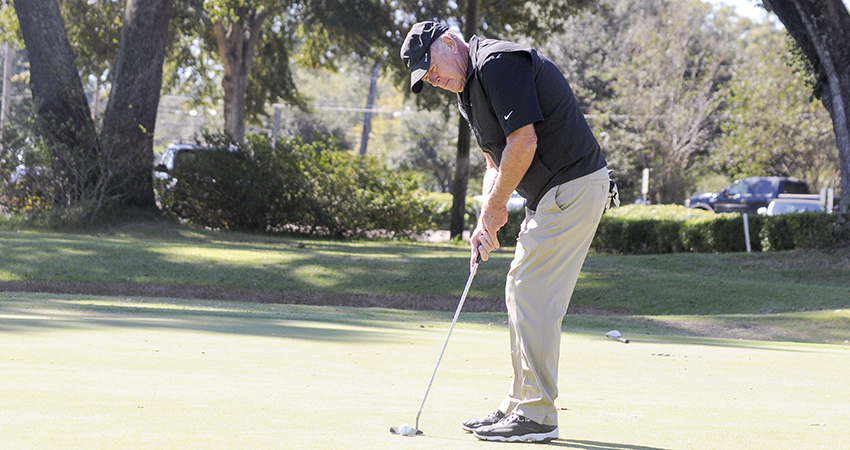 Keith Spry focuses on his putt during the Alabama 60+ Golf Association tournament at the Selma Country Club.

The Alabama 60+ Golf Association began their tournament on a cool and sunny Tuesday morning at the Selma Country Club golf course.

The 69 golfers, who come from all over the state, started at 8:30 a.m. and played through the first morning of the tournament. They’ll be back on the course Wednesday for the final rounds of play.

The Alabama 60+ Golf Association was started around 1977 according to tournament director Leon Davis. Since then, the organization has grown over the years and now has close to 170 members throughout the state.

“This is a group made up of people from all over the state from various backgrounds and everyone seems to enjoy it,” Davis said. “It’s the social aspect, and it’s competitive. We meet a lot of great people.”

The association plays six tournaments every year from March through May and September through November. The only tournament they play in the summer is in July up in Waynesville, North Carolina, because it’s cooler in the mountains, Davis said.

After every tournament, the association puts on a banquet to complete the tournament and give out the awards to the winners of each flight.

The association comes to play at the Selma Country Club course every other year. According to Davis, the members like to use the tournaments as mini-vacations, but Selma puts a special touch on their visit.

“Here at the Selma Country Club, they put on a catfish fry for us every time we come here,” Davis said. “The food is delicious and people were saying [Monday] night that they wished they were having the same meal [Tuesday] night for the banquet.”

Several of the golfers out on the course were pleased with the course and the tournament. Jim Alexander from Millbrook is an active member of the association and was playing the Selma Country Club’s course for the first time.

“Selma Country Club was just a great place for us to get an opportunity to play,” he said. “It’s a beautiful course, and we’re really enjoying it.”

The players will get started again Wednesday morning at 8:30 a.m. for the final day of the tournament. The course will re-open to club members after 12:30 p.m.