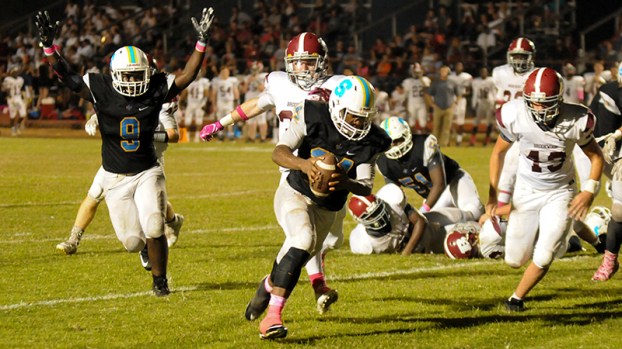 The Selma Saints went marching into homecoming night and marched right out with a 56-41 victory over the winless Brookwood Panthers.

Selma, now 4-3 on the season, got down two scores early, but an explosive second half from sophomores Tyreshon Freeman and Gabriel Wade gave the homecoming crowd something to celebrate.

“It’s big for the program because it’s one more step to where we’re trying to get to,” said Selma head coach Christopher Raymond.

Brookwood scored first on a 6-yard touchdown run from Gene Sledge, but Selma answered right back with a 5-yard score from Amarian Molette. That deadlocked the score at six apiece. 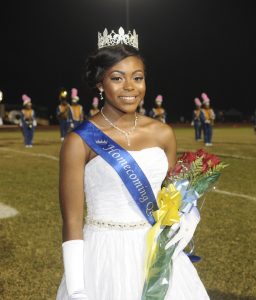 With 1:56 left to go in the first quarter, Brookwood’s Ethan Armstrong showed off his arm with a 53-yard touchdown pass to Khalil Warren.

Once again, Selma answered the bell. After a 33-yard run from Devium Cunningham, he punched it in from one yard out to put the Saints within one, 13-12.

Brookwood turned the ball over on downs on its next drive, and Selma fumbled it back to them. The Panthers extended their lead late in the second quarter with a 32-yard touchdown run up the middle from Sledge.

His second score on the night put Brookwood up 20-12.

Selma attempted a fake punt on its next drive, but the Panthers came up with the stop to give them the ball in positive territory. A few plays later, Armstrong found Sean Carter for a 27-yard score, making it 26-12.

A 40-yard pass from Freeman to Wade set up a Saints touchdown. With 2.9 seconds left in the first half, Freeman found Nicholas Pernell in the end zone to cut the lead to 26-18 at the end of the half.

Raymond said he told his team to execute in the second half, and they did. Pernell caught the kick off on the run, and he never looked back. That cut the Panthers’ lead to 26-24.

But Brookwood wasn’t going down without a fight. A 45-yard run from Jalen Brooks set up a 5-yard score from Sledge, which was his third of the night.

On the Saints’ next drive, Freeman found Wade streaking down the left sideline for a 53-yard score. Allen King added the 2-point conversion to cut the lead to one again, 33-32.

A second turnover on downs for Brookwood let Selma get its first lead of the night and keep it. Freeman got loose and scored on a 73-yard run up the right sideline to give Selma 40-33 lead with 4:24 left in the third quarter.

Selma’s defense came up big on Brookwood’s next drive by forcing a fumble that was recovered by Jacorey Brown.

Several plays later, Cunningham took the direct snap for the Saints and punched it in from seven yards out. King added another 2-point conversion putting Selma up 48-33.

Midway through the fourth quarter, the Panthers finally got rolling on offense again. Warren found the end zone for the second time on the night from nine yards out cutting the Selma lead to 48-41.

Selma’s final scoring drive on the night didn’t start the way they wanted it to after a bad snap led to a huge loss. On second down and what seemed like forever, Freeman got loose and ran for a big gain, but it was called back.

On the next play, he found Wade streaking down the field again for a 65-yard score, making it 56-41.

An interception by Selma’s Corbin Carter sealed the deal, giving the Saints the homecoming victory and a winning record to go with it.

Selma plays at McAdory next Friday.

The Keith High School Bears (4-3) had a big night on Senior Night in Orrville as they defeated the Verbena... read more