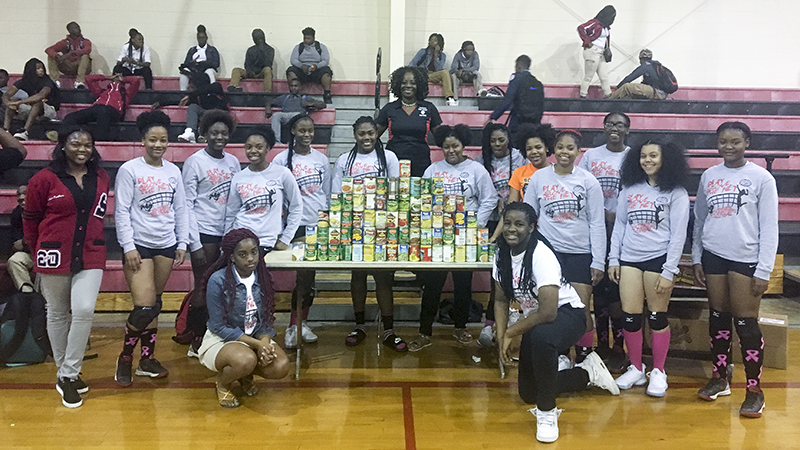 The Southside Panthers volleyball team led a canned food drive that will donate more than 400 canned goods to The Christian Outreach Alliance, Inc.

The Southside High School volleyball team wanted to do something special before their season ended, so they decided to lead a canned food drive.

September was National Hunger Month, and the volleyball team challenged their classmates to a contest to see which classroom would donate the most canned goods.

“We did a contest, and it was kicked off by the volleyball team,” Southside head coach Samantha Henry said. “The volleyball team gave the classroom with the most canned goods a pizza party.”

The players on the volleyball team motivated other students in their various classrooms to get involved in the food drive competition. The winning classroom was Darrell Walker’s history class. Walker said he has four volleyball players in his first two class periods, and they helped motivate his other students.

“Everybody was motivated to bring cans,” he said. “It was very fun, because a lot of the kids were trying to compete and see who could bring in the most cans every day.”

When Walker’s class found out they won the pizza party, they were ecstatic and Walker let them celebrate.

“It felt good,” she said. [The team] enjoyed collecting the canned goods, and it was a big rally among the classrooms. It was a big competition.”

The canned food drive ended in time for the volleyball team to present the donations at their game against Ellwood Christian this past Wednesday.

The canned goods were donated to The Christian Outreach Alliance, Inc. The Food Pantry, according to Henry.

“In our community service, we noticed that The Food Pantry is always running low,” Henry said. “We do it in the offseason and on-season so we can pitch in so it won’t get so low.”

Thanks to the Southside volleyball team, approximately 400 canned goods will be donated to The Food Pantry.

“The kids stepped up to the plate and hit a homerun,” Walker said. “They were so proud to win the pizza party. But to find a way for needy families to have food on the table, that’s even better.”

The Southside Panthers only have three games left on the schedule.

Their next game, on Oct. 12 against the Autaugaville Eagles, starts at 4:30 p.m., and will be the last regular season home match.