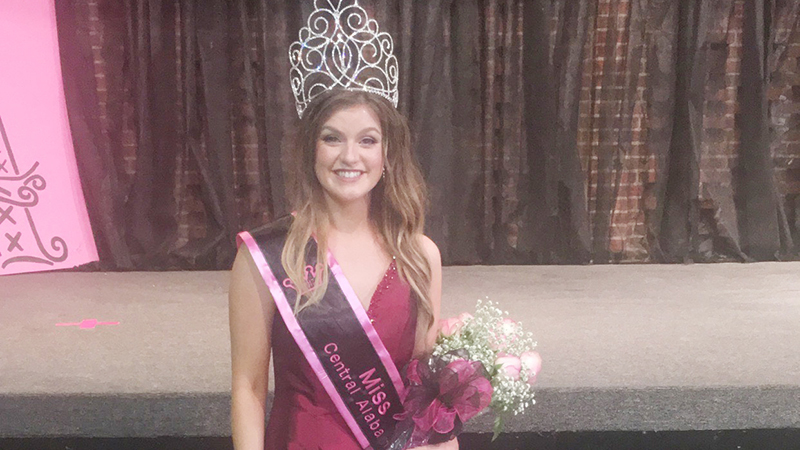 Natalie Massey poses for a photo after being named the 2017 Miss Central Alabama Fair queen.

Now that the 2017 Central Alabama Fair has come to a close, the new pageant queens are ready to take on their roles as representatives of the fair.

Natalie Massey, a 17-year-old senior at Dallas County High School, was named the 2017 Central Alabama Fair queen, and it was her first time competing in the pageant.

Massey competed against four other girls from various schools and said it was fun to meet new people and get to know them through the process.

“It was pretty nice to see new people,” she said. “The girls made me feel really welcome and we all got along.”

Massey has hopes of one day competing in Miss Alabama and becoming a model and said she feels that the Central Alabama Fair is a great way to learn what she needs to be on her way to becoming a state representative one day.

She said the most nerve-racking park was speaking on stage, but she actually enjoyed doing it.

“I’ve never had to speak in a pageant before, so it was a lot to take in,” she said.

For her on-stage question, Massey was asked to tell of a time where she had to overcome defeat and she spoke about struggling with her appearance.

“When I was younger, I struggled with self-confidence due to classmates judging me due to pale colored skin. They said I was ugly no matter what I did, tanning or covering up with layers of clothes,” Massey said. “Nothing changed the paleness of my skin. What I had to do was make a decision and change my thinking and accept who I was and the skin that God gave me and now I embrace it, I’m content, I’m happy, and I’m very confident.”

Massey said it made her feel great to talk about her struggles, especially on stage where other people may relate to her.

“It made me feel free,” Massey said. “People at school didn’t really notice that it bothered me and I would always try to hide it.”

Overall, Massy said she is happy she chose to compete and she would encourage other girls to compete in the 2018 pageant.

“I would definitely encourage [other girls to compete in the pageant],” Massey said.

“It really brings them out of their comfort zone and it will help them feel more confident.”

Lynn Haskell, pageant director, said all of the pageants went well and the girls seemed to have a good time competing.

“It went really well,” Haskell said. “All of the girls had a good time and everyone did an awesome job. We are very thankful to everybody that came out to support the girls.”

Haskell said she is happy to have Massey represent the fair and the Selma Lion’s Club who sponsors the fair.