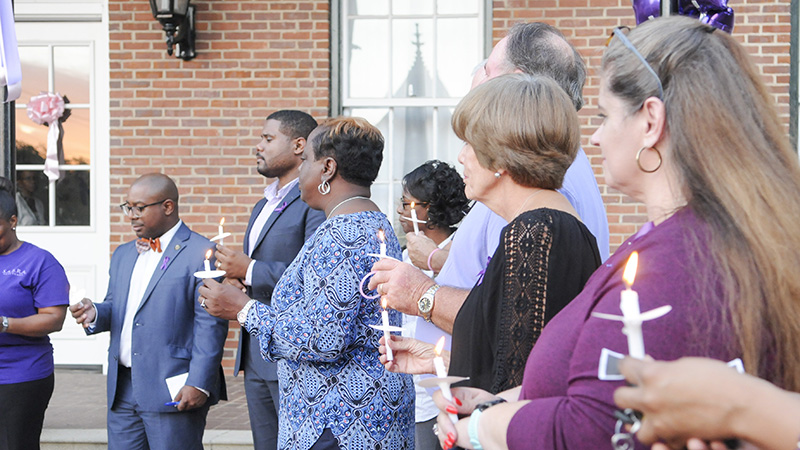 A candle light vigil was held outside the Selma City Hall on Thursday evening to remember victims of domestic violence and celebrate those who survived it. Selma recorded a domestic violence death over the weekend as a man was charged with murdering his girlfriend in an argument.

To some, the month of October means celebrating Halloween or going pink for breast cancer awareness, but to others it means drawing attention to domestic violence.

“Statistics show that every nine seconds someone is abused,” said Remonia Minor, a court advocate for SABRA.

Minor, a domestic violence survivor herself, said this ceremony means so much to her each year.

“It brings back memories because you hear the survivors talk about what they’ve gone through and those experiences,” Minor said.

“It brings the emotional part back, which is also rewarding to see people come out and support those that have lost their lives. For me, I was blessed to make it through domestic violence.”

Christy Barnes Smitherman, a domestic violence survivor, then shared her testimony with the crowd gathered on the sidewalk.

“For years, I lived in shame and in fear. I was manipulated to believe all of his lies,” Smitherman told the crowd. “It didn’t happen overnight. It was a slow process.”

“It means so many things –– hope, encouragement and just knowing the community is out there for support,” she said.

Smitherman said she got assistance from Lighthouse, a domestic violence shelter in Baldwin County, to help her get out of her situation. She said the work Lighthouse and SABRA do makes such a difference.

“It’s life-changing,” she said. “Financially, they help you get to a safe place. They’re there for you emotionally. They guide you and tell you what you’re about to experience before you even know that you’re there.”

Smitherman said she recently joined the board of directors for SABRA Sanctuary and is looking forward to helping people in the community that are going through the same thing she did.

Smitherman encouraged anyone going through domestic violence to seek help to get out of the situation.