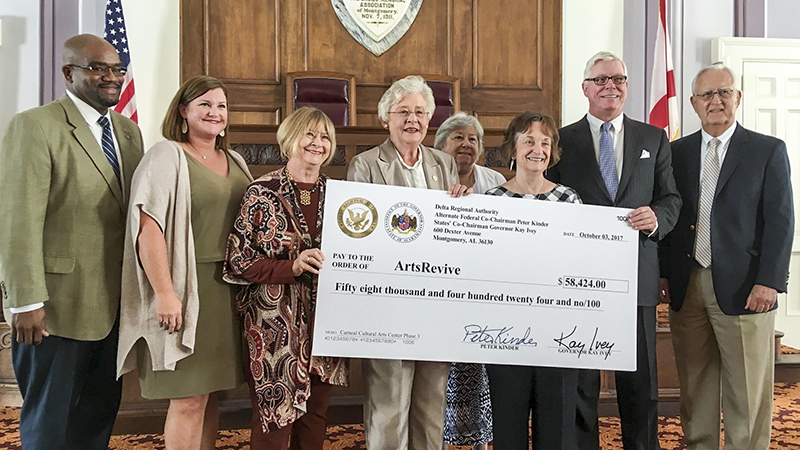 ArtsRevive has received a $58,424 grant from the Delta Regional Authority to invest in its Carneal building at the intersection of Water Avenue and Church Street. Delta Regional Authority co-chairman and Alabama Gov. Kay Ivey made the check presentation along with co-chairman and former Missouri Lt. Gov. Peter Kinder on Tuesday. Shown from left to right are Aubrey Carter, Kea Calame, Gale Bedgood, Gov. Ivey, Sandy Greene, Martha Lockett, Lt. Gov. Kinder and Max Baggett. ArtsRevive invites everyone to come out Thursday for the opening reception of its “Celebrating the Art of Paper” exhibit from 6-8 p.m. at the Carneal building.

ArtsRevive recently received some great news that the organization was chosen by Gov. Kay Ivey and the Delta Regional Authority, together with several partners, to receive a $58,424 grant.

The grant was part of $1 million that was awarded to seven economic developments across the Delta region of the state.

“The Delta Regional Authority is an essential partner to Alabama in helping us meet the needs of the most rural parts of our state,” Ivey, DRA states co-chair, said. “By investing more than $1 million in our state, DRA is helping rural communities strengthen their infrastructure, improve economic opportunities and increase access to important cultural enhancements.”

Martha Lockett, executive director of ArtsRevive, said her organization has worked on the grant for more than six months. She didn’t believe ArtsRevive would be selected until she got the phone call.

“We really had thought that we didn’t have a chance for that,” Lockett said. “We were absolutely beside ourselves. It was just one of those things that you thought wasn’t going to happen.”

The group has been working to raise money for the last two and a half years. With this grant, they can begin to see the end of their construction work, Lockett said.

“That is about half of what we need to completely finish the Carneal Building,” Lockett said. “It’ll help with getting it finally heated and cooled and the installation of the doors so that it can be a fully functioning Cultural Arts Center, and we can start doing the programming that the community has wanted us to do.”

“This new funding will continue to spur economic growth and opportunities in rural Alabama,” U.S. Sen. Richard Shelby said. “Monroeville, Carrolton, Tuskegee, Camden, Selma and Perry County, as well as the entire state, will benefit from these investments, and I am grateful for the partnership Alabama continues to have with the DRA.”

Lockett said ArtsRevive is thankful for the grant, which will allow them to work on creating a small office, paint and improve lighting. The funds will also help replace doors, heating and cooling and insulation so the building can be used year round.