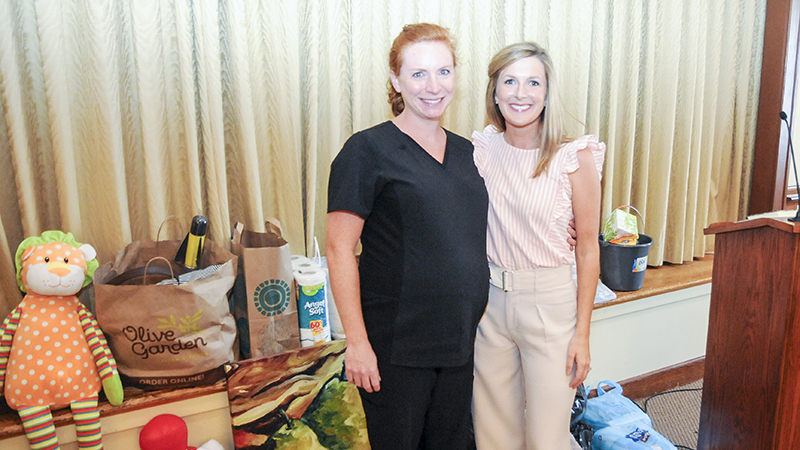 Cornerstone Presbyterian Women of the Church member Abbie Tucker stands with The Bloom House founder Kristen Jones in front of the donations they gave to the non-profit organization during a luncheon Tuesday afternoon.

The Women of the Church at Cornerstone Presbyterian Church welcomed Kristen Jones, founder of The Bloom House, to speak at their luncheon Tuesday afternoon.

Jones shared her journey that began with a prayer and has evolved into a 501 (c) 3 non-profit that provides resources and assistance to orphans and foster care families.

“Cornerstone Presbyterian women take on a project every year to support financially, physically and so forth,” member Cynthia Hammerle said. “We just really believed in this and going full speed to help as much as we can. I’m just overwhelmed with the enormity of her ministry, and we want to be a permanent part of this.”

At the Bloom House, children and foster families in need will be able to take advantage of art, music, cooking, woodworking and life skills classes. The organization celebrates adoptions and birthdays. They also provide prayer support, mentorship, and discipleship among their many other services.

“It’s a support system,” Jones said. “We want to support foster and adoptive families, and we want to educate and equip the community to ask themselves what role they can play, what part they can play to benefit the life of a vulnerable child.”

According to Wanda Goodwin, director of the Dallas County Department of Human Resources, there are 56 children in foster care in Dallas County as of this past August. She also stated that the approximately 23 foster homes are all filled to capacity.

The Women of the Church used the luncheon to donate clothes, cleaning supplies and toys.

They also surprised Jones when they presented her with a check for $1,000 to sponsor a room at The Bloom House. The 14-room resource center is located on 705 Dallas Avenue.

Even though it hasn’t opened yet, Jones plans on having an open house in mid-October to show off the final product.

“Right now, we are just getting set up, and we are trying to just lay a good foundation so that this ministry can serve as many children that we can,” Jones said. “I don’t want to see any more children that don’t have the stability of a family to have to do without basic needs. It’s the church and the community’s responsibility to answer that call, so the money will be used to get this place set up so it will be a warm, welcoming environment for the children to come visit and get some of their needs met.”

The organization is running its open doors campaign to raise money. The Bloom House doesn’t charge for its services, so it’s dependent on the donations they receive from the community. Donors can sponsor one of the 14 rooms with a gift of $1,000 or more.

“I would just like to encourage everyone to ask themselves what they can do,” Jones said. “We are not all called to do the same thing, but we all can do something to benefit the life of a vulnerable child.”