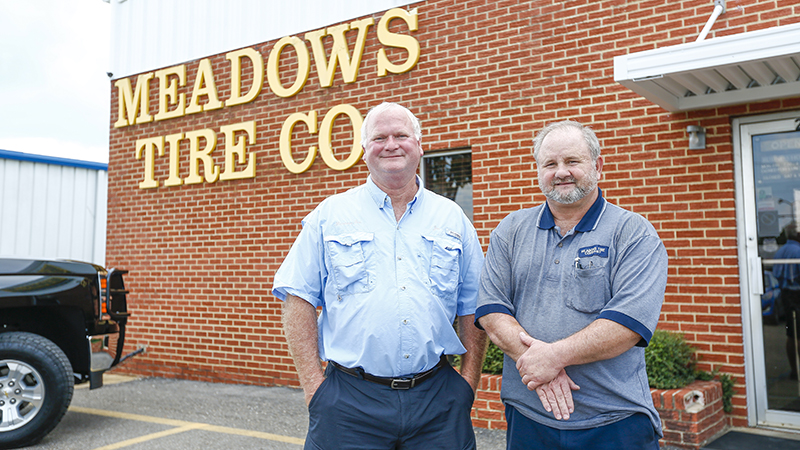 In the midst of World War II in 1942, a Selma businessman was opening his own tire recapping shop — Meadows Tire Company.

The business was founded by Chapman Meadows during a time when there was a shortage of tires in the United States due to the war.

“A lot of things weren’t available. Certain foods were rationed. Gasoline was rationed. You couldn’t even buy a new car because all of the metal went to tanks and armored cars and stuff, and you could not buy a tire,” said Jim Jones, who owns the business today with his brother Mark.

“So he opened up a recap shop. It was called Meadows Tire Recapping. People would bring their car in that morning and drop their car off, and when they picked it up that afternoon, their tires would be recapped.”

Jones said the process of recapping started with an old tire with hardly any tread on it.

“You have a process where you remove the rest of the tread. You buff it off … where you have nothing but a naked tire, and then they would glue a piece of tread on it,” Jones said. “Then they put it in this mold, and it gets real hot, and it cooks it on there. Sometimes it would stay, sometimes it wouldn’t.”

Jones got involved in the business in 1986 when his father, Bobby, bought Meadows Tire Company.

“They were in the Kiwanis Club together, and Mr. Meadows told my daddy back in 1985, ‘My eyesight is so bad I’m going to have to close my business down,’” Jones said. “My father was getting ready to retire from the housing authority. He was a tenant selection officer for the Selma Housing Authority.” 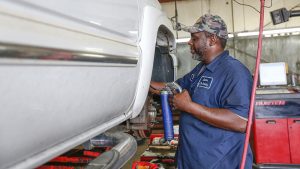 David Henderson works on a truck at Meadows Tire Company, while co-owner Mark Jones (below) is in charge of alignment at the shop.

At the time, the shop was located at the St. James Hotel on Water Avenue, where it stayed for nearly 40 years.

“We had used the second floor and the bottom floor. We had no lifts, and we had no garage. We had to work out on the sidewalk,” Jones said.

One year later, in 1987, the shop moved to its current location on Citizens Parkway, and it has been there ever since.

“Things just kind of snowballed. We modernized and got new equipment and people,” Jones said. “My brother (Mark) came on board two months after we bought it. He was a good mechanic, and he does all the alignment work now.”

Originally, the shop focused solely on tires, but it eventually evolved into more.

“Mr. Meadows did just strictly tires. That’s all he did back in the day. No oil changes, no repairs, just tires and recaps,” Jones said. “We do most anything [now] except major engine and transmission work.”

Over the years, cars have gotten fancier, and tires have changed along with them.

“Years ago, a handful of tires fit just about everything, but now it’s just a colossal amount,” Jones said. “Every year the manufacturer is going to come out with a different size tire for a different vehicle, and we have to keep up with what’s popular at the time so we know what to stock.”

One of the biggest changes Jones has seen during his time with the business is the addition of the tire pressure monitor to cars, which he said came about in 2007.

“Tire pressure monitor systems became mandatory in 2007. Some just tell you when you’ve got a low tire. Some tell you the exact pressure in each tire and even tells you the position that they’re actually in.”

Knowing when new tires are needed isn’t something just everyone can spot, so Jones said everyone should maintain a good relationship with their mechanic and ask them to keep an eye on their tires.

“Establish a relationship with a business where they do your oil changes and your regular maintenance, whether it’s us or another business,” Jones said. “They need to keep an eye on your tires.”

Being in business for 76 years is no easy feat, but Jones said the relationships with their customers has kept people coming back.

“We try to treat customers like family. That’s a cliché, but when they come in the door we try to make them feel comfortable. We try to fix everything the first time, and if not, we make it right,” Jones said. “I’ve met customers over the years that have become friends, and I mean true friends.”

Meadows Tire Company employs nine people, and the number of cars that comes through the shop varies day by day.

Jones said between 30 to 40 vehicles are worked on during the course of a good day.