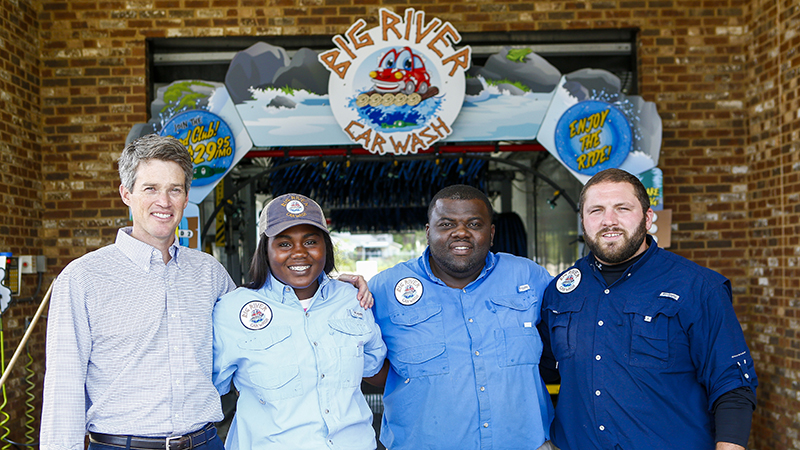 The Henry Brick Company, a family-owned brick production company that was founded in 1945 by J.D. Henry, took a step out of their comfort zone last year and brought a premium express car wash to their hometown of Selma.

“Going from a manufacturing background to a direct retail environment is a little bit of a 180,” Denson Henry, a member of the ownership team, said.

The company wanted to diversify and create a new revenue stream while using their own product to build it, according to Henry.

Big River Car Wash, located on 2409 North Broad St., opened on Oct. 25, 2016. Henry Brick Company was able to invest in themselves by building their new car wash with their own bricks.

“This is our first time to really do something different besides manufacture brick,” Henry said. “All we know is manufacturing, so to jump into the retail sector is a whole different deal.”

One of the major changes in switching to retail is the relationship with the customer. The face-to-face customer interaction is a different model from the brick and construction business, according to Henry.

“This is so much more people-oriented,” he said. “Being in manufacturing, you’re somewhat insulated from the end-user with our brick product, but here you’re face-to-face with the customer every day.”

Instead of just building a standard car wash, the company wanted to make Big River Car Wash a unique venue and experience, according to Henry. The outdoorsman theme is represented in the name, the architecture and even the fake alligators. The main building resembles a camping lodge, except with a high-tech car wash inside it.

The brick build of the cabin themed car wash isn’t the only characteristic that makes Big River stand out. Henry Brick spared no expense to make sure Big River Car Wash had the fanciest bells and whistles available.

“We invested a lot in the equipment,” Henry said. “We wanted to make it first-class as far as the equipment goes and have a first-class experience. You don’t see many brick car washes because they are trying to save money, but we wanted to go all out.”

The attention to detail and willingness to bring a top-notch business to Selma is a big part of the success so far according to manager Desmond Looney. He has been in the car wash industry for seven years and started with Big River Car Wash last December.

“Sometimes in Selma, things may not always be done all the way like a bigger city would’ve done it,” Looney said. “But the Henrys are amazing people, and their willingness to put money into this town is a huge gain for Selma.” 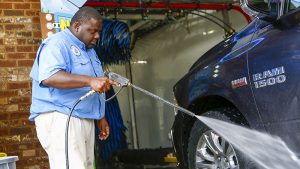 Cedric Tarver gives each car a once-over before sending it through the wash.

According to Henry, Big River Car Wash has the largest cleaning tunnel in Selma, which allows them to put more cleaning equipment in it.

In order to provide the first-class service they were aiming for, Henry Brick attended the International Car Show in Nashville, Tennessee, to pick the minds of industry vets for advice on who could provide the best equipment.

After multiple consultations, they settled on MacNeil Wash Systems, a manufacturer from Canada.

Even though it was costly, MacNeil didn’t disappoint. Big River is operated on a fully automated PLC system that uses sensors and measurements to get the vehicle through the car wash.

Instead of the cloth like bristles in most drive through car washes, Big River Car Wash uses a MacNeil soft closed foam brush that stays in motion constantly throughout the wash. The foam technology is unique because it doesn’t collect the debris from previous washes or get caught on the vehicle.

“Everything that we use is the best-of-the-best,” Looney said. “There was no expense spared.”

Big River Car Wash is approaching its one-year anniversary, and cars are still coming through its gates. According to Henry, business has been good and they have learned a lot in their first year in the express car wash industry.

“It’s been a good first year,” he said. “A good year of learning… We are proud of what we offer.”

Henry Brick is proud to invest back into the Selma community with their new business.

“We’ve been a supporter of our community since 1945, and we are the only large express wash tunnel in the area that can say that we’re from here,” Henry said. “There’s other options out there, but we invested the time and resources to bring something that you just can’t get anywhere else in Selma.”