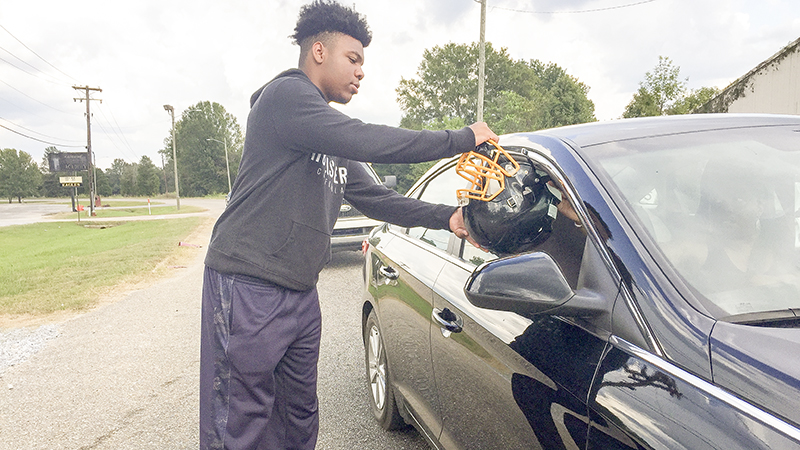 Jaderious Childs, Jermeir King and their teammates stood on the corner of Bell Road and Medical Center Parkway with their helmets out asking for donations to their football program.

“We’re just raising a little donation for our football team,” Childs said. “Trying to get a little equipment and water bottles for trips and stuff.”

In the past, the football team has been on trips to Alabama State University in Montgomery and to Tuskegee University to give the boys a taste of the college experience.

The players waved and called out to cars hoping to gain a moment of their attention from 9 a.m. until 3:30 p.m. They received donations of up to $20 throughout the day as they thanked the donors.

“We try to make as much money as we can, so we can help pay for some of the things that we need,” King said.

In order to pull in more donations, the players also offered up car washes to raise money. They were able to get four cars in on this past Saturday. Every bit of the donations goes to helping ECA fund their football program. The money helps contribute to equipment, team trips and anything else the program needs. Earlier this week, the Selma City Council voted to waive the $400 stadium fee for the football team to continue using Memorial Stadium for their home games. ECA athletic director Denisha Hendrick told The Times-Journal that the school couldn’t afford the stadium fees due to a decline in enrollment.

The players are doing what they can to help out their team. They have been raising money for the past two months, according to Childs. First, it was head coach Mike Stokes’ idea for the players to go out and ask for donations. However, the players decided to keep it going and raise as much as they could, according to King.

The team has not only washed cars, but they also bag groceries for tips at Selma Food Outlet.

“We wanted to keep raising money as a team,” he said. “It helps us bond, and everybody gets to know each other better.”