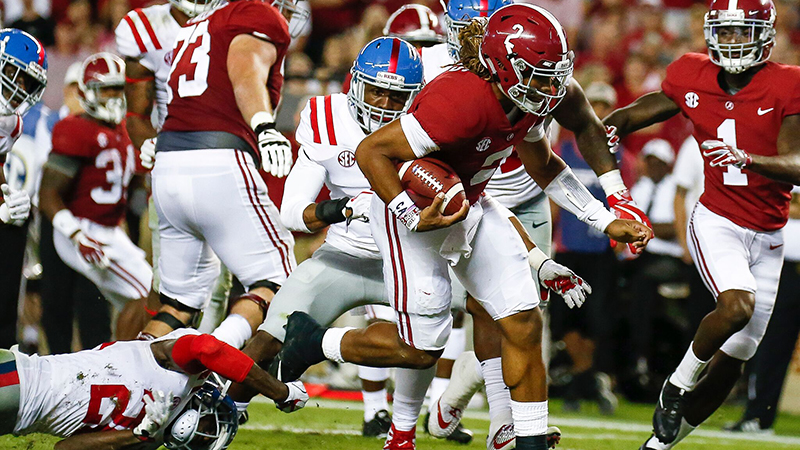 TUSCALOOSA (AP) — Jalen Hurts threw two touchdown passes and ran for a score and No. 1 Alabama let loose on Mississippi 66-3 on Saturday night, emphatically putting down a problematic foe in recent years with the highest-scoring performance by the Crimson Tide in 11 years under Nick Saban.

Ole Miss (2-2, 0-1 Southeastern Conference) had won two of last three meetings with Alabama (5-0, 2-0), scoring 109 points — more than any other Tide opponent over the last three years. The Rebels are the only SEC team to beat the Tide since 2014, and they handed Alabama its only home loss in the past 30 games at Bryant-Denny Stadium.

The way Tide players and Saban were talking leading up to the game it was as if last year’s victory against the Rebels in Oxford didn’t count. Wasn’t dominant enough.

Saban said sometimes the “ultimate disrespect” is when another team quietly believes it has your number. Not anymore. Coach Hugh Freeze is gone and the days of Ole Miss being a threat to Alabama left with him and all those blue-chippers he brought to Oxford.

The Tide made it look easy. Hurts hooked up with a wide-open Josh Jacobs down the middle for an 18-yard score early in the second quarter, and then mimicked holstering his finger guns after tossing the TD pass. Hurts tumbled over tacklers on a 10-yard keeper that made it 35-3 at the half.

In the last two weeks, Alabama has outscored Vanderbilt and Ole Miss by a combined 125-3. The 63-point margin was the Tide’s largest since beating Vandy 66-3 in 1979.

Ole Miss: Can interim coach Matt Luke keep this Ole Miss team, which can’t play in the postseason because of self-imposed bowl ban for NCAA infractions, focused and playing hard this season? There are winnable games in the SEC West, but will the Rebels’ hearts be into playing out the string?

Alabama: One problem (if you want to call it that) the Tide was having early this season was getting to the quarterback. After registering five sacks in the first four games, Alabama had five against Ole Miss.

Alabama lost defensive end Da’Shawn Hand to what appeared to be a left knee injury in the third quarter when he was blocked low by an Ole Miss player. Hand, a senior, was helped off the field by trainers and then carted to the locker room.

Ole Miss: The Rebels are on the road again. They will bring a two-game losing streak to No. 13 Auburn.