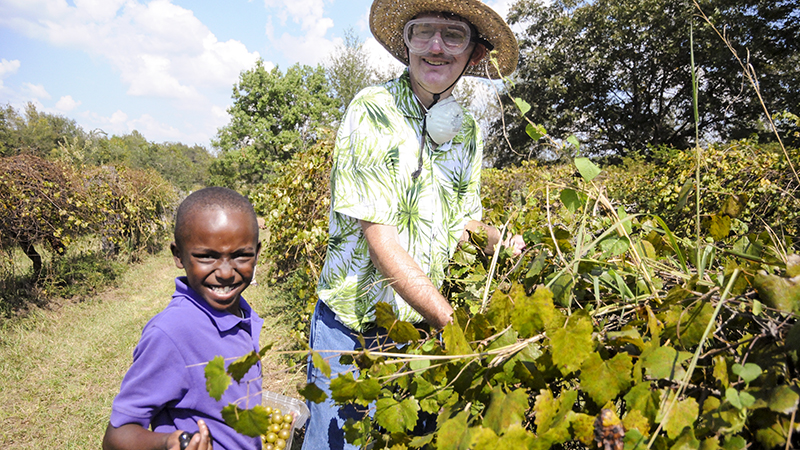 Bowman guided the buses down his self-made trail to where the kids and their teachers could disembark and prepare for the day’s adventure.

Bowman has hosted schools at Bowman Farms before, but this was the first-time Clark Elementary paid him a visit.

“The experience for the kids was excellent,” Clark Elementary first grade teacher Seniqa Smith said. “They enjoyed the tour. They enjoyed picking the muscadines, and they enjoyed the educational part listening to Mr. Bowman tell them about growing up on the farm, how he got started and everything that was needed to keep the farm running.” 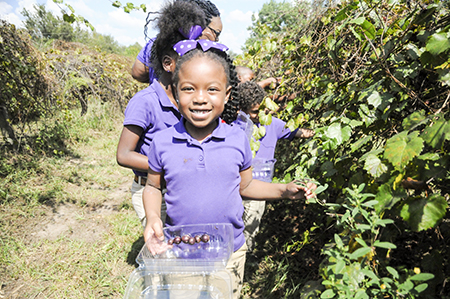 The kids gathered around Bowman as he told the story of his family’s farm and the hard work it takes to be a farmer. He also opened up to the kids about his visual impairment that he’s been living with his whole life. He emphasized how someone can overcome adversity to continue to achieve their goals if they worked hard enough.

“I hope they learned about hard work, about a career opportunity and at least learn that the freshness is better than getting it off of a grocery store shelf,” Bowman said. “You can go right straight to the farm and raise it yourself.”

After his presentation, Bowman escorted his guests on a one-acre walking tour of the orchard.

The kids saw fig trees, plum trees, a pecan tree and, of course, the muscadine grape vines. The trees, for the most part, were out of season, but the muscadines were ready to be picked.

Once lunch was over, the 99 kids and their 12 chaperones were allowed to pick as many muscadines they’re to-go containers could hold.

The children started in single file lines, but as their excitement grew they couldn’t contain themselves any longer and the free-for-all began.

“These kids all left with a bag of muscadines, so they’ll have something they can take home, and let their family see it,” Bowman said. 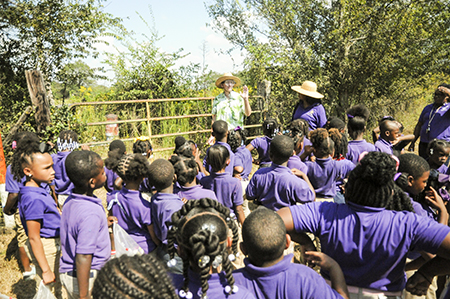 William Bowman gives a tour of his farm to Clark Elementary School students.

Some took their time picking, while others were in a race against the clock to see how much they could collect before it was time to go. Either way, every kid was smiling and went home with a full case of fruit.

“Everybody seemed to have a good time despite the heat,” Bowman said. “But I think everyone had an educational opportunity of seeing how fruit is actually raised on the farm to how it looks in the grocery store.”