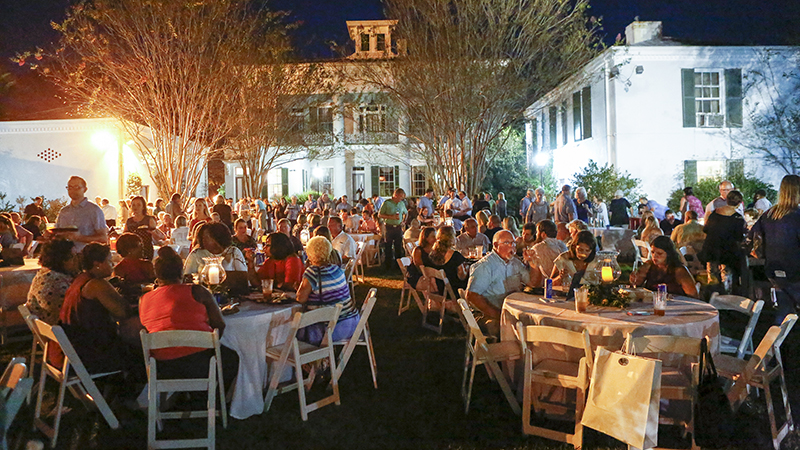 The annual Sturdivant Hall Barbecue on the Green was held in 2017.

Sturdivant Hall was buzzing with activity Thursday night as more than 500 people attended the annual Barbecue on the Green.

The event is the largest fundraiser for the nonprofit organization that runs the 1800s Greek Revival home.

“This year we were really sold out. We had 26 corporate tables this year, and when we first started we had nine,” said Patti Currey, who runs the gift shop at the museum. “We still had people calling for tickets today.”

Golden Ranch catered the barbecue, and people were quick to line up and get their share of food.

“It’s just been fun,” Currey said. “It is just a wow for us. All the money goes to Sturdivant Hall, and it’s a great contribution and a great tribute to our building.”

Claude Anderson, a past board member, still does his share to help out because he wants to see the historic-home-turned-museum flourish.

“This is a major fundraiser for Sturdivant Hall. As we know in this day in time, funds are hard to come by, and there’s not as much government money that comes in to support something like this,” Anderson said. “It really is a treasure. It’s one of the most beautiful antebellum homes that I’ve ever seen, and I’ve gone all throughout the Southeast and looked at them.”

Sturdivant Hall offers tours to the public, but also hosts events like weddings during the year to help fund overhead costs.

But the barbecue remains the largest fundraiser each year.

“It helps a lot going toward the building. The funds that we make for the nonprofit for the building helps out tremendously,” Currey said. “Everybody has worked hard that’s on the board to get this together. It’s just a great fundraiser for us.”

Anderson said the building is a treasure for Selma, and the city is lucky to have such a place to utilize.

“The fact that the public can still use it is incredible,” he said. “It’s truly a treasure for central Alabama.”

Not only does the back lawn become full of people during the event, it just gets them out to the building in general, and even shopping in the Sturdivant Hall Gift Shop, and Anderson said that’s a great thing to see.