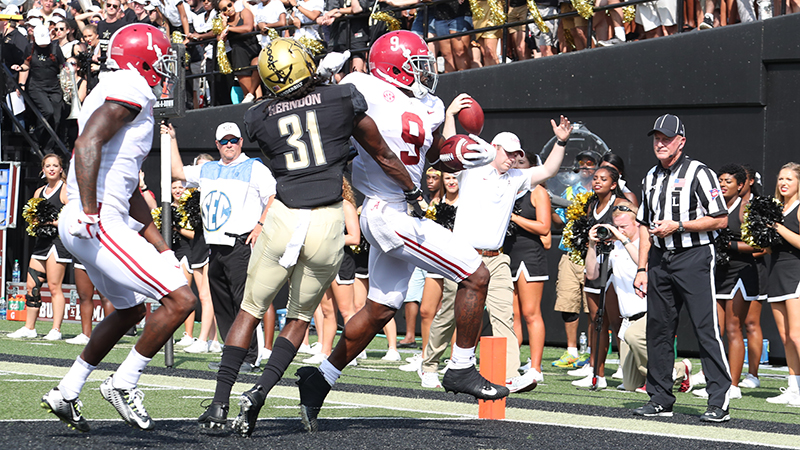 Alabama running back Bo Scarbrough scores against Vanderbilt. The Tide shut out the Commodores in Nashville. Photo by Kent Gidley | The University of Alabama.

NASHVILLE, Tenn. (AP) — Alabama coach Nick Saban challenged the top-ranked Crimson Tide to prove they knew how to not only win but dominate an opponent for a full 60 minutes.

That, and a bit of motivation provided by the confident Vanderbilt Commodores , was all Alabama needed.

Alabama (4-0) now has won 19 straight over the SEC East. Better yet, the Crimson Tide hasn’t lost to Vanderbilt since 1984 or in Nashville since 1969. Both streaks were assured at the end of the first quarter with Alabama up 21-0 after the second of Harris’ TDs. And the Crimson Tide didn’t let up.

“Until we learn how to do that, which I think we did today, I don’t think you’ll ever get the respect you deserve,” Saban said. “I think they earned a lot of respect today.”

Alabama outgained Vanderbilt in total offense 677-78 before running out the clock late for the largest margin in the program’s vaunted history. The Crimson Tide also set a school record with 38 first downs, topping the 36 earned Nov. 22, 2014, against Western Carolina.

Crimson Tide players heard lots of chatter leading into the game about how prepared Vanderbilt and coach Derek Mason thought they were for this game.

“We want to be respected … usually we are,” Alabama quarterback Jalen Hurts said. “I guess we felt like we didn’t have the respect that we kind of wanted coming into the game, so we just came out and came out here and tried to play Alabama football. I think we did a good job today.”

Vanderbilt (3-1) came in as one of the five remaining undefeated teams in the SEC with the nation’s stingiest defense in points, total yards and against the pass. The Commodores had allowed just 13 points combined through three games, yet they proved no match against Alabama’s dominating ground game.

Harris topped his season’s best by the end of the first quarter and needed only 12 carries for his big day, thanks to a 61-yarder in the first quarter . Scarbrough ran 11 times for 79 yards more with TD runs of 6 and 2 yards. Brian Robinson added a 17-yard TD run in the fourth quarter for a 59-0 lead.

The Crimson Tide simply smothered Vanderbilt, allowing just 49 yards in the first half to Alabama’s 48 offensive plays. Mason said his Commodores ran into a buzz saw.

“I was outcoached today. We were outclassed,” Mason said.

Alabama got linebackers Rashaan Evans and Anfernee Jennings back after they missed the last two games with injuries. Jennings forced a fumble recovered by Da’Shawn Hand for the second takeaway by the Tide defense in the first quarter. Ronnie Harrison intercepted a tipped pass that ended Vanderbilt’s opening drive.

Kyle Shurmur came in completing 71 percent of his passes for Vanderbilt. With Alabama pressuring the quarterback, Shurmur was just 4 of 15 for 18 yards.

“We have a lot of respect on Kyle Shurmur and put enough pressure on him I think it affected him a little bit and probably helped us in the game,” Saban said.

Alabama: The Tide showed the defensive woes against Colorado State were a mere blip, forcing two turnovers within the first 12 minutes.

Vanderbilt: As disheartening as this loss was, Alabama has been doing this to everybody in the Eastern Division and most of the conference. The Commodores now have to regroup quickly with the SEC schedule only getting started, but this was their worst loss since falling 65-0 to Tennessee in 1994.

The stands were filled with lots of red with Alabama fans filling approximately three-quarters of the stadium. Asked about the support at a home game, Vanderbilt wide receiver Trent Sherfield had a short answer: “We play for each other.”