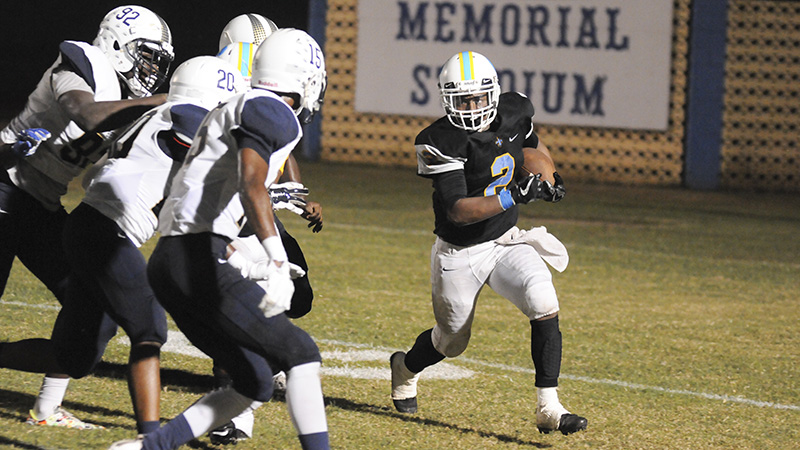 lma running back Amarian Molette runs the ball against Paul Bryant Friday night in a 45-8 loss at Memorial Stadium.

Three turnovers were too much for the Selma High School Saints to overcome Friday night in their 45-8 loss to Paul Bryant High School at Memorial Stadium.

The Saints (2-2) gave up two first quarter touchdowns and were only down 13-0 going into the second half, but the Selma offense couldn’t get into a rhythm.

“Paul Bryant’s a pretty good team, and we didn’t play our best,” said Selma head coach Christopher Raymond. “We played, I think, our worst game of the year. We didn’t execute. You can’t play in 6A ball doing the things we did tonight.”

Selma kicked off to Paul Bryant to start the game, and the Stampede wasted no time getting on the scoreboard. Gary Quarles Jr. took the opening kickoff to the house to go up 6-0 after a blocked extra point attempt.

“We talked about starting fast all week and finishing the game, and we got a chance to do that tonight.”

On their first possession of the night, the Saints fumbled the ball away. The Stampede then marched 73 yards down the field, and Quarles added his second score of the night on a 35-yard scamper, giving them a 13-0 lead.

The Saints came up with a big third down and 15 with a pass from Freeman to wide receiver Gabriel Wade, but a few plays later they were forced to punt the ball away.

Selma’s defense stood tall on the Stampede’s next drive and forced a fumble with 11:48 left in the second quarter. With the ball in plus territory, Selma came up short again. A Freeman pass fell incomplete on a fourth down and seven.

Paul Bryant’s next drive ended on a fourth and short. The Saints defense stood tall again, stopping the runner short of the first down.

With the momentum on their side, the Saints were looking to get on the scoreboard. A late hit penalty and a face mask put them in prime position. With the ball on Paul Bryant’s 10-yard line, Selma fumbled again.

“It was big because it could have been a change in the way the game went,” Raymond said. “I think in the first half we self-destructed, and I think it carried over throughout the rest of the ball game.”

Selma’s defense got the ball right back for their offense, but they turned the ball over on downs again. Paul Bryant failed to make anything happen on their final drive of the first half as well.

The Saints got the ball to start the second half, but Freeman threw an interception to Brylan Lanier, who returned it down to the three-yard line. One play later, Quarles added his third score of the night, giving the Stampede a 19-0 lead.

After a Selma punt, Paul Bryant struck again. This time it was a 45-yard touchdown pass from Justin Cannon to Zachary Bates, which put them up 25-0 with 9:06 left in the third quarter.

On their next drive, Paul Bryant scored again on an 11-yard pass from Cannon to Danny Kimbrough. That score made it 31-0. Cannon scored again but this time with his legs. He ran it in from three yards out, giving the Stampede a 37-0 lead.

Selma scored its only touchdown of the night with 7:17 left in the fourth quarter. Amarian Molette took the direct snap and punched it in from one yard out. He added the two-point conversion as well, cutting into the lead 37-8.

Paul Bryant’s final score of the night came with 3:30 left in the game. Backup quarterback Ty’Javian Edwards scored on a 33-yard quarterback keeper, making it 45-8.

Raymond said there were a lot of mistakes to correct, and that’s what the focus will be in practice this upcoming week.

Selma goes on the road next week to play Sumter Central (1-4), who lost to Dallas County 32-18 Friday night.