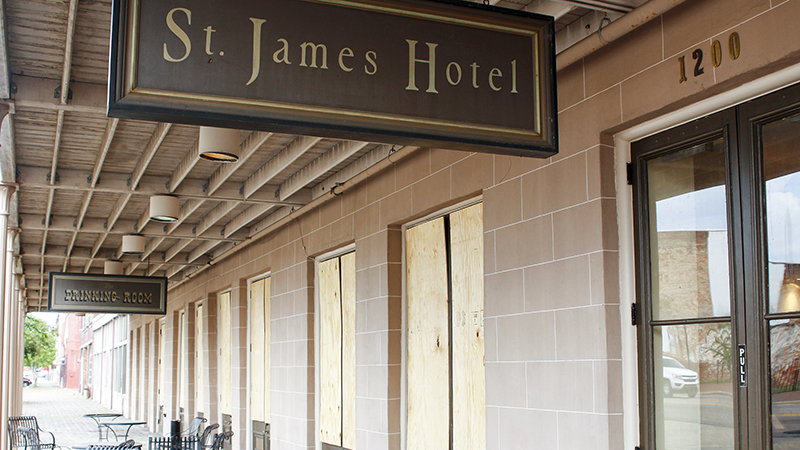 The downstairs windows of the St. James Hotel have been boarded up after a deal to sell the hotel fell through last week.

After a deal to sell the St. James Hotel fell apart, the historic Water Avenue landmark has been boarded up.

The hotel’s first-story windows were covered with plywood Wednesday. The final deadline for hotelFUBU and its parent company Erudite Holdings, LLC, to purchase the St. James passed last week without a sale.

Selma Mayor Darrio Melton has said the city cannot afford to keep the hotel open. The city closed the hotel, which was already running a skeleton crew, in July so hotelFUBU could evaluate renovations and other work that needs to be done.

Since then, the city has paid about $10,000 a month for 24/7 security as well as utilities. HotelFUBU said they would reimburse the city those costs before the deal went sour.

Melton has said the hotel would have to be boarded up until hotelFUBU comes back with the financial backing to buy the hotel or another company comes along to buy the St. James.

“We are concerned about vandalism, and I don’t want anything taken out of that hotel, but at the same time, we can’t afford to keep it open based on the budget we have,” Melton said. “It’s draining our general fund.”

City council members have expressed concern about boarding up the hotel and not having security present.

“If that building is empty with no security or nobody working, it is going to be vandalized and has stuff stolen. We cannot have an empty building sitting down there. We’ve got to have some presence there in some form,” said Councilwoman Susan Youngblood at last week’s council meeting.

Council members have asked whether it would be less expensive to go back to a minimum staff. City Treasurer Ronita Wade said the city spent about $16,000 to run the hotel at bare bones; however, that was offset by some revenue coming in from the bar and for rooms.

Melton said that number could only cover payroll and not other expenses generated from running a bar and hotel.

The mayor said the police department would work to beef up its presence, especially at night.

The council has voted to list the hotel for $700,000 with Hotel Assets Group, a real estate company out of Atlanta that specializes in the sale of hotels.

Council members said they would still entertain the $400,000 offer from hotelFUBU if the company can come up with the full purchase price and has the financial backing to pay for renovations, which could be more than $3 million.

“The issue was getting all the money needed to renovate that hotel to get a return on your investment,” Melton said. “Any business person won’t go into an area where they can’t make a profit.”