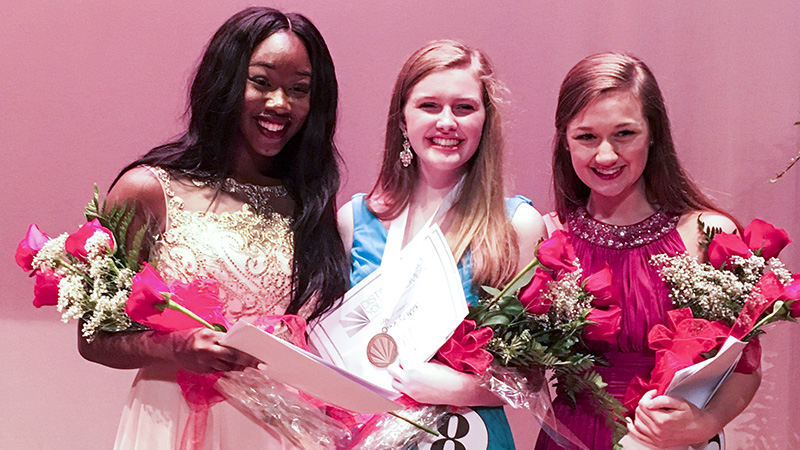 Scheer was named the DYW of Dallas County at the conclusion of the night.

“I’ve always wanted to participate in the program,” Scheer said. “I heard great things when I was little about how much fun it was and what a great scholarship opportunity it was, so I’ve known for a while that I wanted to participate. I was super excited that I was able to do it this year.”

Scheer won in scholastics, talent, interview and won the “Be Your Best Self” essay.

For her talent, Scheer performed Polonaise in A-Flat Major, Op. 53 by Frederic Chopin on the piano.

“I don’t play for other people very often, so that was pretty nerve-racking, but I had a really great time, and it was a good opportunity to showcase my talent that I don’t usually have a chance to show,” Scheer said.

Besides taking home $4,000 in scholarship money, Scheer said the program was a great time to meet new people and develop friendships she otherwise may not have had the opportunity to make.

“I think it’s a great way to form new friendships because you are all together working toward a common goal all at the same time and seeing each other every day for extended periods of time, that it really becomes like a family and a group that you just feel so comfortable talking to,” she said. “It was definitely a great way to meet girls. All the girls that I met were super sweet and lots of fun, and I would have never met them otherwise. It was a great opportunity to form friendships with girls that we wouldn’t have encountered otherwise.”

Scheer said she was overjoyed to win the competition, and she is looking forward to the state competition in January in Montgomery.

“I was just over the moon when I won. Everyone was just so talented and were so hard working, that it was truly an honor to be named out of such a group of girls, when any of us deserved it,” she said. “The program was so much fun.”

The first alternate to Scheer was Stewart, followed by second alternate Brooks.

Winners in fitness were Stewart, Angion and Brooks; self-expression was Stewart, Brooks and Angion; scholastics were, Yocum, Scheer and Shepard; talent was Brooks, Scheer and Stewart; and interview was Angion, Yocum and Scheer. Reeves was presented with the spirit award.

Overall nearly $11,000 was awarded to participants.