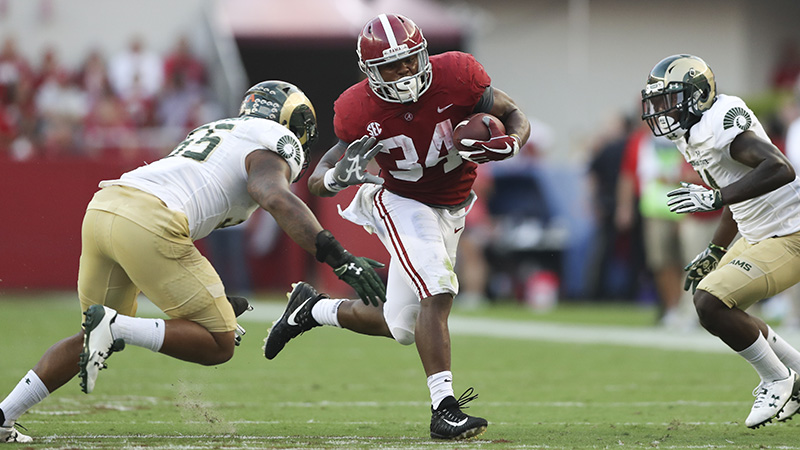 TUSCALOOSA (AP) — Jalen Hurts passed for 248 yards and two long touchdowns and rushed for 103 yards to lead No. 1 Alabama to a 41-23 victory Saturday night over Colorado State.

The Crimson Tide (3-0) dominated early and emphatically answered a comeback attempt before outlasting the Rams (2-2).

Hurts delivered his best all-around game of the season. He ran for a 27-yard touchdown and hit on a career-long 78-yard scoring pass to Calvin Ridley and a 52-yarder to Robert Foster.

“I think it was huge, because they had gotten the momentum in the game,” Tide coach Nick Saban said.

“We got ahead 17-0 and they scored two straight drives, a touchdown and field goal. For us to answer the bell and come back and score points on that drive was huge, especially going into the halftime.

“But you allow teams like this to think they can play with you and they do and they play better as the game goes on.”

Hurts completed 12 of 17 passes and mixed in 11 carries before leaving late in the third quarter.

It was his second straight 100-plus yard rushing performance.

The Tide needed just 10 minutes and a few big plays from Hurts to race to a 17-0 lead. The first-quarter stats were utterly one-sided, with Alabama outgaining Colorado State 216-11.

The rest of the game was more competitive in Alabama’s second straight matchup against a team from the Mountain West Conference.

Colorado State, which had two fourth-quarter touchdowns, cut it to 17-10 briefly. Then Foster caught a pass on the left sideline and sprinted toward the middle before making his way to the end zone. It was his first touchdown catch since 2015.

Alabama tight end Morris Forristall left with what Saban said could be a season-ending knee injury.

Alabama visits Vanderbilt in its Southeastern Conference opener and first game in an opponent’s stadium next week.