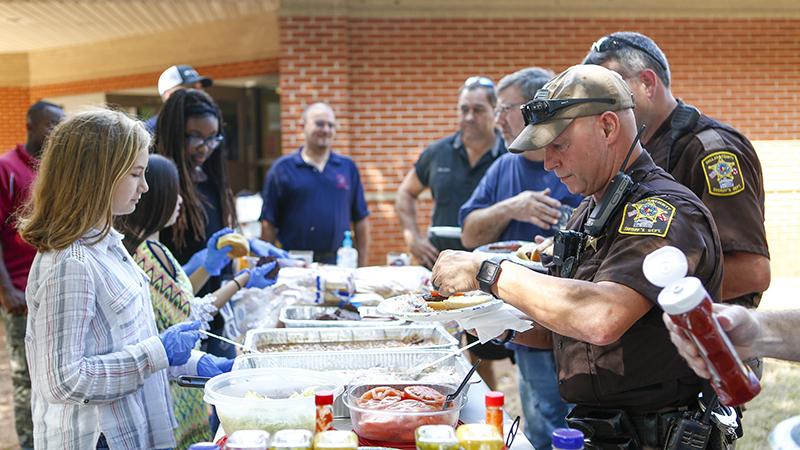 The Martin Middle School robotics team is gearing up for the kickoff of Selma’s BEST Robotics next Friday by following along with this year’s theme and giving back to the local first responders.

The first responder theme gave them the idea to hold a fish fry and cookout to honor and serve the ones that serve them every day.

“This year’s theme is about first responders and the part that they play in our society,” said Gaylen Denson, robotics instructor at the school. “We decided as a group that one thing we wanted to do was to serve them so we got together and sent out a lot of flyers and texts to all the area first responders.”

Police officers, Sheriff’s deputies, firefighters, EMTs and more came out to the cook out to enjoy lunch and spend some time with the students.

“I think it’s great. It’s awesome to feel appreciated,” said Barry Hood, a Dallas County Sheriff’s deputy. “I think it’s pretty neat to get us all together and to see the kids out asking us a lot of questions about different scenarios and the work that we do.”

Calvin Edwards, an Alabama State Trooper corporal, said it’s about building relationships and being there to talk with the kids on just a normal day.

“You build up that relationship when it’s not something drastic. Most of the time when you have to interact with kids it’s for something not very good. But something like this cookout, we just get to hang out with the kids.”

Dylon Morgan, an eighth grader and president of Martin Middle Robotics, said students decided as a team to hold the cookout to go along with the theme and to show how much they appreciate first responders.

“We decided to do this because this year’s course is based on first responders. We decided out of all the stuff that is happening, we should honor the first responders on this day,” Morgan said. “Usually, I’m on the receiving end, but now I get to serve them.”

Parker Weatherly an eighth grader on the team, said it’s fun to see the men and women there and to talk with them in person.

Denson said it’s just a good opportunity for the kids to give back but to also get to know first responders and ask about their jobs and what they do on a day to day basis.

“A lot of times, they don’t see all that goes on as far as protecting society and taking care, like right now with the natural disasters going on and the first responders that we need to help us in our everyday life,” Denson said. “It gives the students a first-hand look at the people that are actually doing this.”