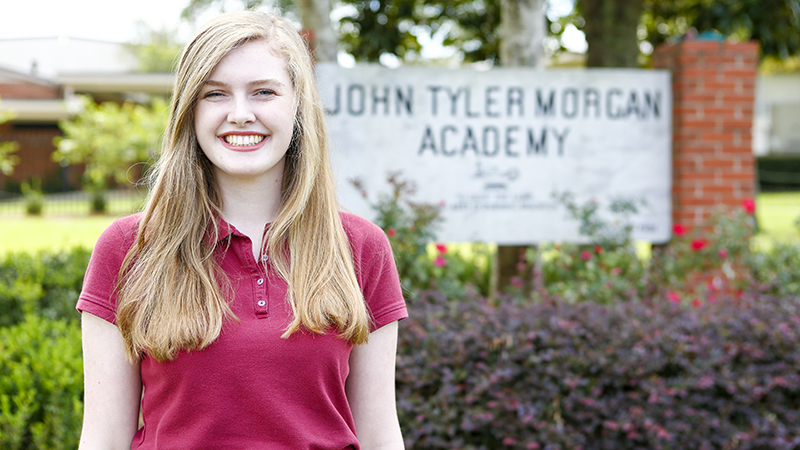 Morgan Academy student Kellee Scheer has been named a National Merit Scholarship semifinalist and will now work toward being named a finalist in the nation-wide program.

Morgan Academy student Kellee Scheer has been named a National Merit Scholarship semifinalist and has the sole honor of representing her school and the city of Selma in the nation-wide program.

In their junior year, students across the country take the preliminary SAT and National Merit Scholarship Qualifying Test to see if they will qualify for the prestigious award. According to the corporation, about 1.6 million juniors in more than 22,000 high schools entered the 2018 program and 16,000 of them were named semifinalists. That’s less than one percent of high school seniors in the United States that were honored to represent their state.

“I was very excited,” Scheer said of finding out she was a semifinalist. “I’ve always heard people talk about National Merit Scholars and what a big honor it is, so when we took the PSAT last year, I got really excited and thought I did really well and was hoping this would come about this year.”

From the approximately 16,000 semifinalists, around 15,000 are expected to advance to the finalist level.

To become a finalist, Scheer will have to be endorsed by a high school official, write an essay and earn SAT scores that confirm her earlier performance on the qualifying test.

“I would be ecstatic,” Scheer said in hopes of advancing. “Besides the scholarship money, just the prestige of being able to say that I worked hard enough and was able to earn such a large nationally recognized scholarship. It would just be fantastic.”

Sheryl Schroeder, guidance counselor at Morgan, said a few students in the past have been recognized by the program, but it has been several years.

“We are thrilled. The National Merit Scholarship is probably the most prestigious scholarship throughout the nation,” Schroeder said.

“It will give her tremendous exposure at so many schools, as well as scholarship awards and offers.”

Schroeder said Scheer is very deserving of the award, and she hopes to see her advance far and do well when she leaves Morgan.

“We are very, very proud of her,” Schroeder said. “She’s been an extremely hard worker, very deserving and the sky is the limit with this young lady.”

Scheer said she hasn’t made her mind up yet on where she will be attending college, but she is keeping her options open.

She does plan to major in chemical engineering at whichever school she chooses to attend.

Scheer said after finding out that she had been selected, she was excited to tell her parents, Steven and Michelle Scheer, and they were excited for her.

Overall, Scheer said she is just excited to represent her school and grateful to be selected.

“This is a great honor just to be able to represent myself and my school to show that even though Morgan is a small school and Selma is a really small town, that we do have students that can compete on a national level,” Scheer said.