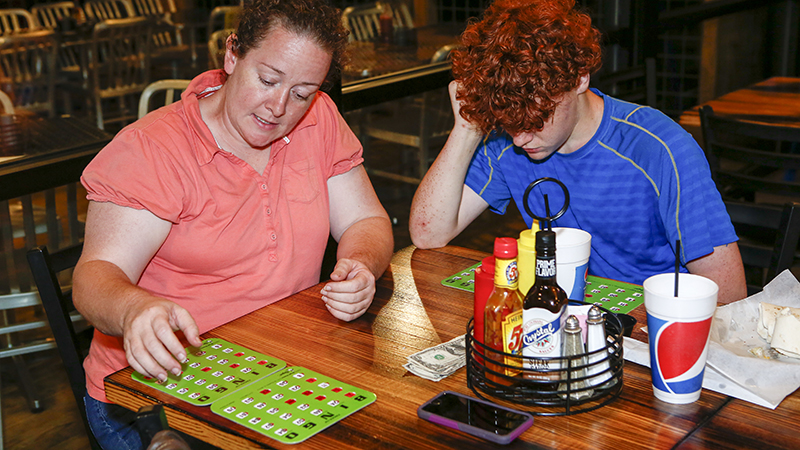 Since June, the Humane Society of Central Alabama and Selma’s Purrrfect Pals have been out at the Sand Bar restaurant raising money for cats and dogs in need.

Through games of Bingo, the organizations have raised nearly $1,000.

“The Bingo was the brain child of the late Angie Lawrence, who was the office manager at Selma Animal Hospital,” said Jacque Johnson, Purrrfect Pals volunteer. “She felt like we could raise serious money for the animals of the Humane Society and Selma’s Purrrfect Pals.”

Johnson said Lawrence knew how much the animals needed the help, and she thought Bingo was a great way of supporting them but also bringing the community together.

“Being working there in their clinic, she knew of the great need that we had in the area. Angie had a heart for the animals and really wanted to try to help them all,” Johnson said. “This was her way of giving back and starting this and getting it organized and sponsors to come forward and begin this in June.”

Not only do the organizations raise money from those playing the game, they also receive a portion of sales every Tuesday night from the Sand bar.

“We really appreciate their sponsorship of this and being able to earn some money,” Johnson said.

Johnson said the money is primarily used for the spay and neuter of pets as well as getting them to see the vet when they are sick. The money also helped the shelter repair the air conditioning in the cat room.

Terri Carlee has participated in Bingo Tuesday a couple times and said she enjoys getting out of the house and having fun for a good cause.

“I have two little rescue puppies myself, so I just like to help out little puppy dogs,” Carlee said.“I think it’s great. In Selma, we don’t really have a whole lot of stuff like this, and I really like coming out and doing stuff like this. It’s somewhere to go and have fun and give back.”

Johnson said the organizations have had a good response, and they hope to continue having people come every Tuesday to support the animals.

“It’s been really great to have a good response,” she said. “We have some that come faithfully each week and some that may come every few weeks and we appreciate them all.”

Bingo Tuesday’s are every Tuesday at the Sand Bar. Bingo cards are $.50 a card all night until the last round which is $1.

The Humane Society and Purrrfect Pals will also sponsor an adoption event every first Saturday of the month from 10 a.m. until 2 p.m. at the Selma Animal Shelter. Dog adoptions are $100, adult cats are $25 and kittens are a pair for $50.