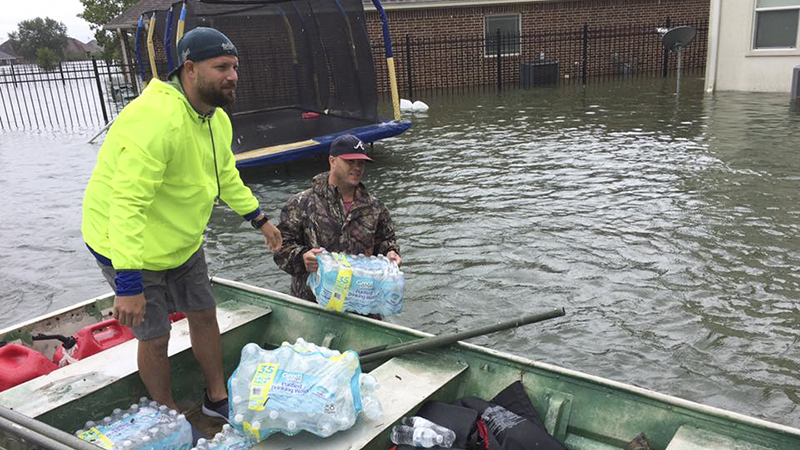 Matt Klimis, pastor of No Limit Church, hands cases of water to Chase Knight while helping people in south Texas that were affected by Hurricane Harvey.

Aug. 28 was just an ordinary day for Sean Barrett — until he decided he wanted to go to Houston, Texas, to help rescue people from the devastation of Hurricane Harvey.

Barrett said that decision was a life changing moment for him, pastor Matt Klimis of No Limit Church in Valley Grande and six other church members.

“I was on my way to Jemison to do a job, and I was listening to the radio. They were talking about the flood and everything, so it got me thinking about it,” Barrett said.

He started looking at Facebook and saw where people in several duck hunting groups he is a part of were loading their boats up and hitting the road to Texas.

“I just started feeling like I’ve got a boat in the barn. Why not? I tried to shake the idea … and I couldn’t get it off my mind,” Barrett said. “The first person I called to go was [Klimis] because I knew he was crazy enough to go with me. I asked him if he wanted to go to Houston, and he said let’s go.” 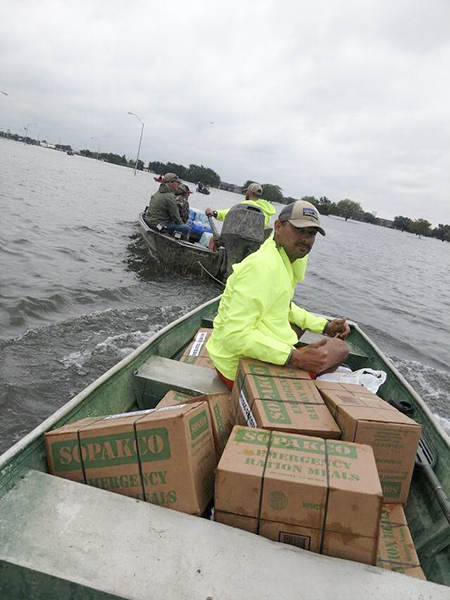 JR Lowe rides in a boat full of cases of MREs No Limit Church members took to Houston with them to help people after Hurricane Harvey.

“The best sermon I’ve ever preached was last Sunday. Not because I spoke well but because he called me the next morning and said let’s go,” Klimis said. “I didn’t even pray about it, whether it was a good idea or not.”

Barrett, along with Klimis, JR Lowe, Chase Knight and Jake Knight, announced they were going to Houston.

That’s when the community got involved by bringing cases of water, food, money and other supplies.

“We went and got my boat, and within two days we had an unbelievable amount of donations,” Barrett said. “The Selma Area Food Bank donated a lot of food, members of the church, people that weren’t members of the church, just anybody you could think of was dropping stuff off at the door and calling Matt. It was awesome.”

The group left the next day in two trucks with two boats and supplies.

“It looked like a warzone when you first pulled in there,” Barrett said. “When we first got down there it was insane because none of us really knew what to do. There were cars and trucks everywhere, boats everywhere, helicopters flying over. It was insane.

Barrett said they put their boats in the water on the side of the interstate. They backed down an off-ramp, put in and got to work.

“The first thing we did was kind of just ride around looking in neighborhoods and stuff for people that wanted to be saved,” Barrett said. “A lot of the people we found in their houses wanted to stay in their houses. They weren’t ready to leave.”

Barrett said they also spent much of their first day in Texas helping carry elderly people out of a flooded nursing home to safety.

“The second day we went around finding people that wanted to stay in their homes and handed out food and water and doing whatever we could do,” he said.

The group returned to Selma Friday and are glad they decided to go and help.

“It wasn’t just a mission trip,” Klimis said. “This was a life changing moment, a Genesis moment for us.”

Klimis said they plan to go back in the near future to help with rebuilding.