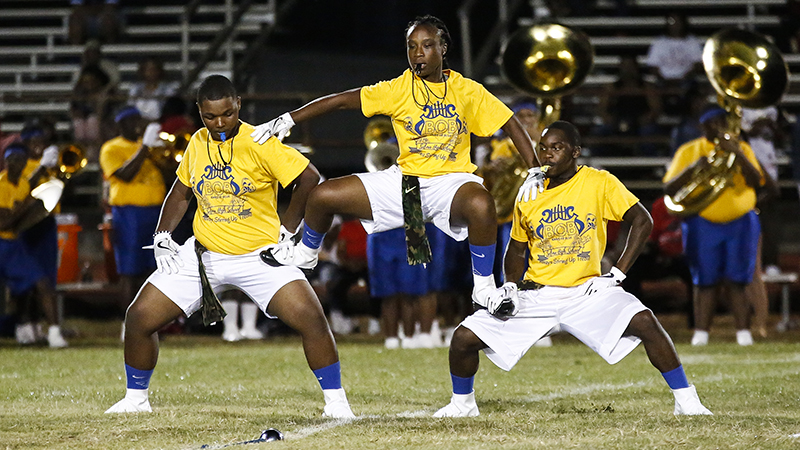 Jalen Norwood, Tyeshia Hartley and Cameron Walton danced their way onto the field Friday night with a whole band of Selma Saints behind them.

They opened their show with Hartley getting at the top of a pyramid formation as they swayed back and forth. The crowd was yelling and cheering them on as they got the band ready for the performance.

But that execution didn’t happen overnight. The three have put in many hours of work over the summer and their work isn’t done yet.

Through the sweat and 100-degree weather, all three said their relationship has turned more into that of siblings rather than co-drum majors.

“We’ve been here all summer, we’ve done sweated together, exercised together, everything,” Hartley said. “They’re like my brothers.”

Walton said they’re so close, they even finish sentences for each other.

“We are just like brothers and sisters,” Walton said. “When we get ready to say something, the other says it first. Just because we have that bond and we’ve been around each other long enough.”

They’ll all agree, though, that although they’ve made new friends and have a lot of fun in band, it’s still a lot of work.

“It’s hot, we work a lot, but I wouldn’t trade it for nothing in the world,” Hartley said. “I love it more than anything.”

Norwood, the head drum major, said a lot goes into leading the band, but there are a lot of rewards too.

“The first thing that goes in to being a drum major, is you have to have great leadership skills. You have to have a level head when it comes to this because there are moments when you will be overwhelmed,” Norwood said. “This being my second year, I have seen things that have overwhelmed me. You need leadership, dedication, time, constant energy.”

Norwood wanted to become a drum major after seeing them out on the field and seeing how much fun they have.

“What really made me want to become a drum major, was my first year in the band I heard what all the drum majors do and seen what all they do with the dancing and directing, and I said “Hm, I want to do that,’” Norwood said. “Every day is fun. There’s hard work and sweat, but coming back in the band room and having fun with everybody is the best time.”

Hartley saw another female drum major and how she took control of the band and knew that was what she wanted to do when she had the chance.

“I was at R. B. Hudson and we had a pep rally for out S.A.T. tests and when the band came, I saw that the [drum major] was just hyping everybody up and I saw that she was leading them, she’s doing something right,” Hartley said. “She was doing something that I wanted to do and I wanted that spot.”

Hartley has always had a love for band, and now that she helps lead it, she feels like she’s accomplished a goal.

“When I was six or seven years old, I was running to Broad Street from my house to see the parade and now I’m in it,” Hartley said.

“It really makes me feel good to know that I’ve accomplished this much and that I make a difference.”

For Walton, this is his second year trying out to be a drum major and his first to make it. Even though he didn’t get the role last year, he continued to work to improve and secure a spot at the front of the band.

“My mom has always told me to never give up and keep my head up and just keep pushing and trusting in God,” Walton said. “I didn’t make it my first time [trying out], but this year I got lucky.”

The three work on leading the band, but they also get to work with former Saints drum major Darian Stitten on choreography.

Walton knew he wanted the leadership role when he was at Edgewood Elementary School and the Saints band visited. Now that he has it, he said his favorite part is the dancing.

“I love to dance. That’s the best part,” Walton said. “It takes a lot of work and time and effort, but once you get all of that done, you get to the fun part and that’s just dancing.”

Being in the band takes up a lot of time, and Norwood said that’s a good thing.

“It’s keeping me occupied with my time. If I didn’t have band, I’d probably be laying down not doing anything or just on the streets,” Norwood said. “With band, it actually helped me to start waking up on time because usually I would wake up I just wouldn’t get up. Now when my alarm clock wakes me up, I just go ahead and get up and start my day.”

Norwood is also in JROTC and said with the two programs, he is working on his leadership skills for his future role in the armed forces.

“I’m in ROTC too and that’s a big thing, leadership. That was the main thing that led me to this. Becoming a leader is something that I’ve always wanted to do,” Norwood said.

“This has helped me and it’s teaching me the core things of what a leader should do.”

Norwood has hopes of attending the Air Force Academy or Jackson State University and becoming a member of the Air Force. If he is able, Norwood would like to be in a university band and become the drum major one day. Hartley is only a junior and hopes to be the drum major for a second time next season. She plans on attending Auburn University or Alabama State University and hopes to be a cosmetologist and a physical therapist one day. For now though, she’ll focus on band and her grades.

“I love it. I love it so much,” Hartley said. “Every piece of sweat that drops off my nose marching with them, I love it.”

Walton would like to attend Tuskegee University or Auburn University and is interested in graphic arts and animals. He hasn’t decided whether band is in his future, but he plans to enjoy it while he can.

“When I graduate, I may even cry,” Walton said. “It’s going to be a heartbreaker.”

Cardesh Pettway Jr. serves as the junior drum major and Brandon Williams is the band director.