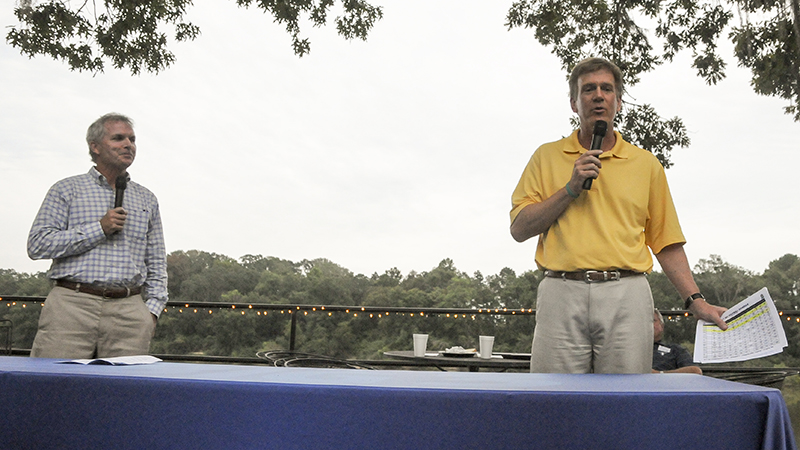 “Sportsline with Longshore and McKnight” co-hosts John Longshore and Barry McKnight speak at the Selma Quarterback Club’s first meeting for the 2017-18 football season.

The Selma QB Club kicked-off their first meeting of the season Monday night with guest speakers John Longshore and Barry McKnight of the “Sportsline with Longshore and McKnight” radio show on SportsRadio 740.

“This is our kick-off rally that we have every year, and we’re excited about our lineup of speakers that we have,” Selma Quarterback Club captain Perry Woodruff said. “We’re even more excited about the turn-out and the membership this year. We’re trying to increase from last year, and it looks like we are doing that.”

The radio co-hosts spent the evening sharing their football knowledge with the quarterback club members with the Alabama River behind them.

The two sportscasters have been working together for more than 20 years, and they basically did a live show for the Selma Quarterback club.

Longshore and McKnight began with Alabama and Auburn football before going through outlooks for the rest of the SEC teams.

According to Longshore, Alabama and Auburn are “the cream of the crop,” in a top-heavy SEC West division. McKnight stated that the West could possibly come down to the Iron Bowl game, which is in Auburn this season.

The kickoff meeting was well attended by quarterback club members eager to gather some insight on their teams as football season is finally here.

“It’s the beginning of football season with both big games, Alabama and Auburn, coming up this weekend,” Selma Quarterback Club finance chairman Forrest Hatfield said. “Everybody is excited for football, and this is how we kick it off.”

It was a great afternoon at Julius Talton’s home on the river where the kick-off meeting was held. There was plenty of cloud cover, and it was comfortably in the mid-70’s for the crowd that fellowshipped over Hancock’s barbeque.

“The turnout was good, and it was a perfect environment tonight,” Hatfield said. “We’ve got a good crowd. We’ve got about 140 members right now and that generally grows a little bit after we start the first night.”

Longshore and McKnight were well received and the kick-off meeting wrapped up with several questions from the audience as it had finally started to get dark.

“John had told me what a great group this was and we knew the level of support they have for their high school athletes and the scholarships that they give,” McKnight said. “This is one of the best quarterback clubs that we have a chance to speak to. For us, it’s an honor as much as anything else.”

The quarterback club brings together all football fans, no matter which fan base they belong to.

“It’s a good thing for Selma and a really good thing that all the money goes to the scholarships,” Woodruff said. “We give out five scholarships a year of $1,000. So, that’s $5,000 and it’s good for four years as long as they stay in school and maintain their grades.”

The next quarterback club meeting will be at 6 p.m. on Monday, Sept. 11, at the convention center.

The guest speaker will be former University of Alabama and Green Bay Packers quarterback Scott Hunter.