Watson to be honored for four decades at Tally Ho Restaurant 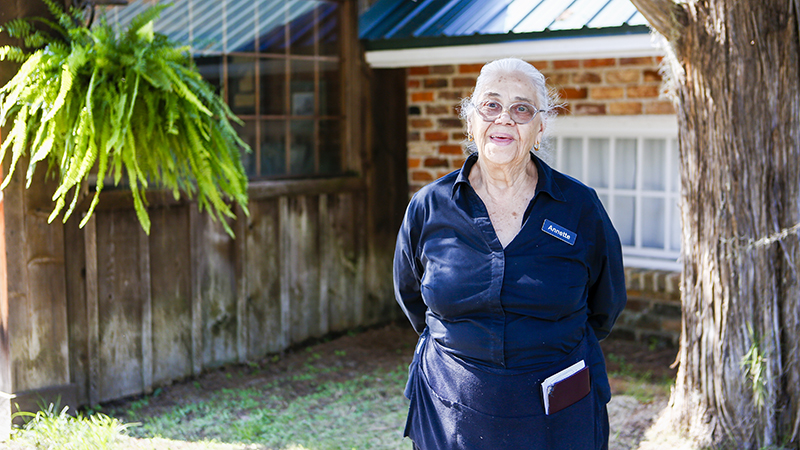 Annette Watson is being honored by the Tally-Ho for working at the restaurant for the past 40 years.

Annette Watson has spent nearly half of her life serving the people who walk through the doors at the Tally-Ho restaurant, meeting new people and making life–long friendships.

The 82-year-old loves her customers, and although she has been at the restaurant for four decades now, she has no plans to go anywhere anytime soon.

“It’s been a good 40 years,” Watson said. “I enjoy the people that I’ve met over the 40 years. I’ve met people from all over the world that have come here, and I’ve enjoyed it.”

Watson has had the opportunity to watch families grow, and new ones come and go. She’s made some pretty loyal customers through that.

“I have a lot of regular customers that always ask for me,” Watson said. “The best part is meeting the people. I have made a lot of friendships.”

Paul Wilkerson, owner of the restaurant, said he can testify to Watson having her own fan base.

“She’s been here so long that many customers want her that night, but we have to say sorry she’s too busy and give them to someone else,” Wilkerson said. “She’s an anchor to the business and has been for many years.”

Wilkerson said working with Watson has been a pleasure, and he is happy she plans to continue working, keeping him and the staff straight.

“She’s almost a mother figure,” Wilkerson said. “I probably couldn’t do this without her. If we reset all of the tables, she can come up to the table and move it one inch and everything feels better because that’s where it’s supposed to be.”

Watson has been at the Tally-Ho for longer than anyone currently on staff.

Bob Kelley, the former owner, said Watson was more of a friend than an employee to him.

Kelley said she was very familiar with her regular customers and would check on them if they didn’t show up on their normal day.

“She’s a person that if a regular customer didn’t come on a day that they normally would, she might call their home and ask how they’re doing and make sure they’re fine,” Kelley said. “When I think back over the years, I can’t think of anybody that gave better service and cared more about her job.”

Wilkerson said the restaurant plans to hold an appreciation celebration with cake and beverages in the Cahaba room Saturday, Aug. 26 from 5-7 p.m. for anyone that would like to come by and say hello to Watson.

“It has been a good 40 years and I’m very grateful that they have kept me on this long,” Watson said. “I’m not as strong as I used to be, but I still keep up.”