In their second home match of the season, the Senators were unable to win a set against the Wildcats.

The Senators fell behind early in the first set by giving up six points before they earned their first. The team struggled to score as the Wildcats quickly built a significant gap that was too much to overcome.

The second set started out even, but quickly got out of hand. After the score was tied 2-2, the Wildcats went on a 10-point run before head coach Kayla Thacker called a timeout.

The Senators were able to score right after the timeout, but gave the ball back to Edgewood for another quick four-point run.

The Wildcats built up a 19-5 lead before the Senators were able to consistently get points on the scoreboard.

The third and final set didn’t get off to a better start for the Senators.

The Wildcats scored the first nine points of the set, and put the game out of reach early. The girls continued to hustle after balls and attempted to make a comeback, but the deficit was too steep.

The Wildcats took the final set 25-12, and gave the Senators their first loss of the season.

“Edgewood is a really good team, and they’re really well coached,” Thacker said. “Our girls played our game like we would play it, but the outcome is not what we wanted.” 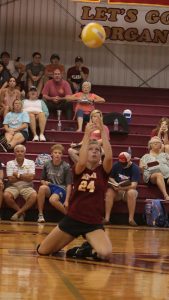 Laney Holladay sets up a return for her teammates in Tuesday’s loss to Edgewood.

According to Thacker, playing a quality team like Edgewood is good preparation for the rest of the season. The team learned a couple lessons from Tuesday’s match that will help them improve their game.

Even though the Senators took a tough loss at home, starting the season 6-1 is still impressive. They will have another challenging home match against Macon East on Thursday, Aug. 24. The junior varsity team will start at 4 p.m., and the varsity will begin at 5 p.m.

One of the keys to this season’s fast start is the continuity from last year. In Thacker’s second season as the head coach for the Senators, she is fortunate to have three seniors on a team full of returning players.

“I had everyone returning except for three seniors,” she said. “The team has really stepped up and filled those holes, and still work well as a team. It’s like the same team two years in a row.”

Behind the seniors are four juniors and six sophomores that are ready to play.

“Technically, I could have 13 starters because that’s what I have on this team,” Thacker said. “It’s hard for me to decide who is going to start this game or that game, because all of them are really good players.”

Seniors Hannah Free, Kenzie Horton and Regan Hewitt stepped into their role as leaders of the team, according to Thacker.

“Now I have three people that anybody can look to, and everybody counts on them to do their job,” she said.

On this team, there isn’t a spotlight on any particular player. Thacker is confident that they are all equally strong, and the teams’ best strength is their serving ability.

“Everyone serves really well,” she said. “We’ve really worked and progressed on that.”

On defense, the Senators strength is their ability to cover each other and fill in the gaps. Thacker says her team’s coverage and returning skills are strong, but they can improve on tips at the net.

The team knows how to win, and will need to rebound quickly because region games are coming up soon.

“I think playing teams like Edgewood and Macon East, two really good teams, are going to get us ready for Clarke Prep, which is our region game next week,” Thacker said. “And that one is the one that really counts.”