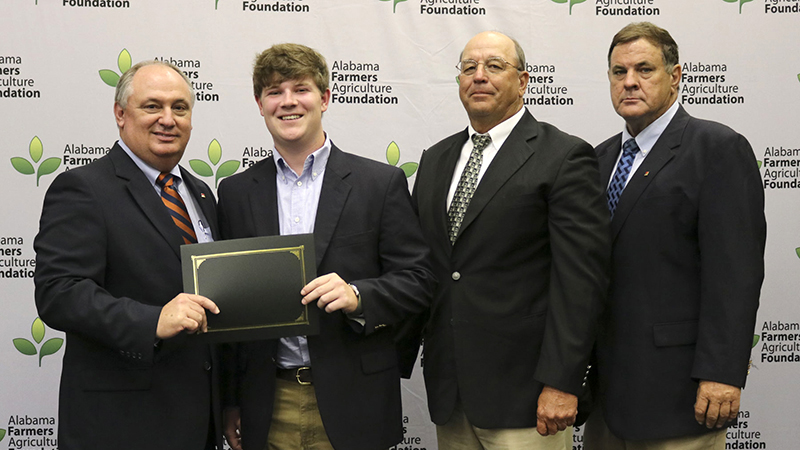 Federation President Jimmy Parnell said as agriculture and technology evolve, the organization’s most important task is investing in the future.

“These young people have answers to questions producers haven’t even thought of yet,” said Parnell, an Auburn ag graduate. “These days, it takes an education to be able to farm and do it correctly.”

“I want to make a commitment on behalf of all the students — we will be the next generation of ag leaders,” said Isbell, a Colbert County native and former Federation intern. “You have equipped us, and when it’s time for you to retire, we will be ready. We will step up, lead this industry and represent the farmers of our state.”

Clay County Farmers Federation President Michael Dick said though his county organization is small, it recognizes the importance of scholarships.

“As a teacher and high school principal, I spent a lot of time helping graduating seniors choose where they would go in life,” said Dick, who is now retired. “This is a wonderful way we help students pursue an ag or ag-related field. We’re proud of these students and the way they’re committed to hard work.”

At the reception, Kim Slay wore two hats — wife of Chambers County Farmers Federation (CCFF) President Phil Slay and parent to scholarship recipient and AU senior, Zach. Thanks to the Federation, CCFF and Alfa Insurance, almost half the forestry student’s tuition is paid.

“When I married into my farm family, I didn’t realize I was marrying into the Farmers Federation,” said Slay, an AU animal science graduate whose children grew up attending Federation events. “Because of our Alfa family and like-minded individuals and organizations, when Zach graduates next spring, he will not walk off with a crippling load of student debt.”

Fifty-nine $1,750 scholarships were awarded through a county Federation match of $500. The AFAF contributed $1,250, along with support from the Federation and Alfa Insurance.

The Alabama Farmers Federation is the state’s largest farm organization with nearly 360,000 members in 67 counties.