Despite his health, Tyler Duncan refuses give up on his team 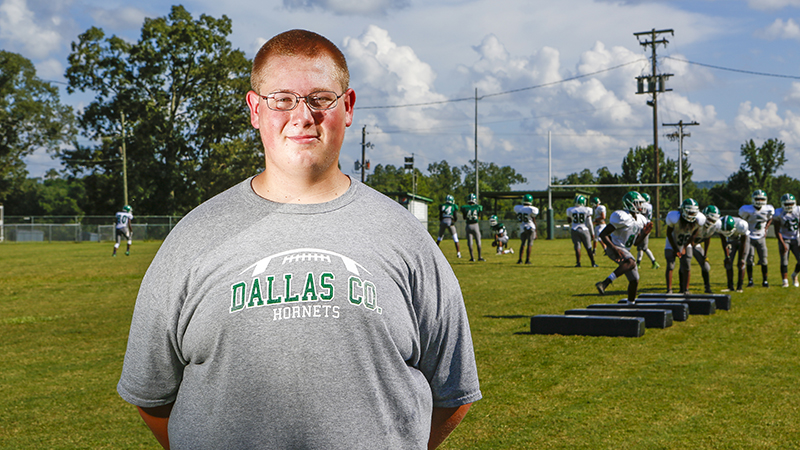 Philip Tyler Duncan refuses to let Cushing’s disease keep him away from football or his Dallas County Hornet family.

The Dallas County High School Hornets football team will start this season without one of their key players in Philip Tyler Duncan due to a health battle he’s fought so determinedly to overcome.

It wasn’t a fractured finger, MCL tear nor a concussion that has sidelined Duncan for the entire season, but pain that stems from a health condition he’s had since he was 12 years old.

“When he was 12 years old, we started having problems with him being focused in school,” his mother Stacey Buchanan said. “He was coming home in the afternoon really tired and sluggish. One afternoon he came home, and said he didn’t feel good. He laid down on the couch and started throwing up.”

Alarmed by her son’s condition, Buchanan took her son straight to the emergency room. In the emergency room, doctors found out that Duncan’s potassium levels were low and they transferred him to Baptist Heath in Montgomery for more testing.

Duncan was then transferred to the Children’s Hospital in Birmingham where Duncan spent three to four days in the ICU, according to Buchanan. While waiting to find out what was going on, Duncan was still ill and started passing kidney stones.

On their final day at the Children’s Hospital, Duncan was seen by the endocrinologist, Dr. Joycelyn Atchison.

“I remember her walking in. She looked straight at me and she told me ‘I know what is wrong with him. He has Cushing’s disease,’” Buchanan said.

According to the U.S. National Library of Medicine, Cushing disease is a condition in which the pituitary gland releases too much adrenocorticotropic hormone (ACTH). ACTH stimulates the production and release of cortisol, a stress hormone that is normally released during stressful situations and helps reduce the immune system’s response to inflammation. The pituitary gland is located below the base of the brain.

A few of the symptoms include slow growth rate in children, easy bruising and weakening of the bones.

Once Duncan was diagnosed, he went straight to the NIH Clinical Center in Bethesda, Maryland, for weeks and months of more testing, Buchanan recalled. The impact of the disease was taking a noticeable toll on Duncan.

“It stunted his growth,” Buchanan said. “He was short, chubby and really moon-faced.”

On July 12, 2012, Duncan went into surgery at the NIH Clinical Center, and a neurosurgeon removed a tumor from his pituitary gland.

Unfortunately, that wasn’t the end of Duncan’s medical problems. Due to the drastic drop in cortisol levels, Buchanan had to learn how to administer injections to her son when his levels got too low. They have them under control now, but Duncan still gets checked every six months as a precaution.

Dr. Atchison also noticed that Duncan wasn’t growing at his normal rate. A bone density test determined that his bones weren’t maturing at the regular rate.

The struggle was long and hard for both Duncan and his mother. The whole process rattled them both.

“It hurts me as a momma to see him in pain,” Buchanan said. “No mother wants to see their child go through anything, but it’s been a blessing to see him lean on God. And we’ve overcome a lot, and to this day Tyler will still push himself to the limit.”

Somehow, through all the testing and hospital visits, Duncan never lost his passion for football.

Duncan missed two years of football before coming out to play for the Hornets his sophomore season.

During a practice one afternoon, his bones got the better of him.

“We were going through drills, and I turned to take a step. When I turned, one hip popped, and when I tried to take the other step my other hip popped out too,” Duncan said. “I could feel it, and when I heard it I just fell to the ground.”

The injury was a result of his lower bone density. The injury ended Duncan’s sophomore season, and required him to go through surgery again. He had a rod placed in both hips, and had to learn how to use his lower half all over again.

After he fully recovered from his hip injury, Duncan came back again to play football for the Hornets in his junior year. At this point, Duncan can’t stand too long without feeling pain. He tried to get through practices and will himself through the pain, but again it was too much and he was unable to finish his junior season.

“At that time, I felt like I wasn’t really hurting, and I knew I could probably go,” he said. “I felt like I should push myself to make myself better. But I realized I was hurting myself, so I had to stop myself.”

Despite having another long recovery process ahead of him, Duncan was able to convince his mother to allow him to give football one more shot.

“He kept telling me he could do it,” Buchanan said. “As a mom, I know that I shouldn’t keep pushing it, but I didn’t want to tell him ‘no’ and hurt his feelings. I want my children to try and do as much as possible, and learn from things. I wanted him to be able to do what he wanted to do until he couldn’t do it anymore.”

For his senior year, Duncan tried one last time to play for his team. The second family that he loves being a part of. He went through summer workouts, and gave his all in the first week of practice.

Unfortunately for Duncan, he can’t beat Cushing’s disease off the ball or wrestle it to the ground like he would an opposing defender. He played in this year’s spring game, but the pain was so intense when he got home that it brought him to tears.

After speaking with his mother and seeing the bigger picture, he met with Hornets head coach Cliff Matthews on Monday Aug. 14., and decided he could no longer play football.

Matthews was hired in July, and was debriefed on Duncan’s history as he got to learn his new players.

He was looking forward to Duncan’s comeback to the offensive line.

“Just looking at him, you really couldn’t tell he was hurt,” Matthews said. “You could tell he was a little slow in running and sometimes it bothered him where he couldn’t walk a little bit. But you would think that was just regular football pain. He never complained.”

Even though he was losing a player on the field, Matthews wasn’t going to let one of his hardest working student-athletes just walk away from the team.

“It’s funny because his mom thought we were going to let him go,” Matthews said. “No, he has a position. He’s got a full-time job now.”

Duncan is still a member of the Dallas County Hornets football team, and is now pushing his teammates from a managerial role. He assists coaches with their drills, and makes sure his teammates are working hard in practice.

“Coach was really supportive of my decision, and he was there for me 100 percent,” Duncan said. “He said I do not want you to leave this team. I still want you to be a part of this team.”

Through it all, Duncan never gave up on himself nor his team. He persevered through a disease that tried it’s best to whittle his spirit. No matter how much it hurt, Duncan always came back.

“It’s been a blessing to watch him go through so much struggles in his life and still be where he is at today,” Buchanan said.