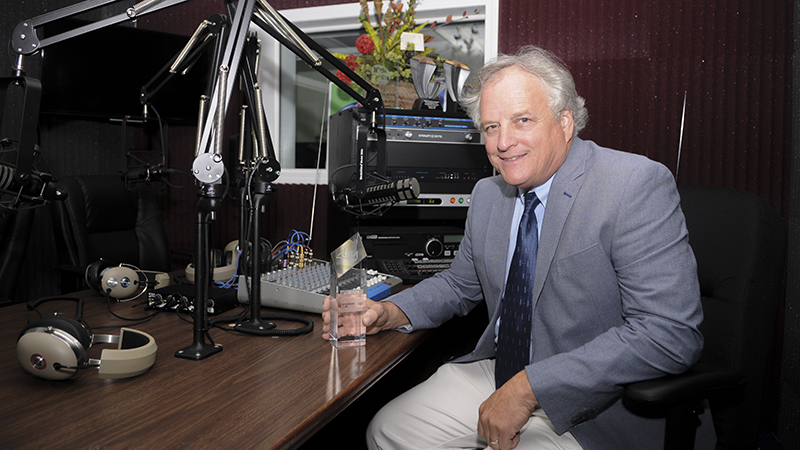 Selma broadcaster Scott Alexander was named Alabama Broadcasters Association’s Broadcaster of the Year over the weekend.

Selma broadcaster Scott Alexander has been named the Alabama Broadcasters Association’s “Broadcaster of the Year.”

The announcement was made Saturday at the association’s annual conference during the Broadcast of the Year and Hall of Fame luncheon.

“It’s a great honor. I’m very humbled, and I was very excited about it,” Alexander said Monday. “It was a total surprise.”

Alexander said the ABA board made the decision in June, but board members, along with his family, friends and fellow broadcasters kept it a secret until Saturday.

The announcement was made by Rick Peters of Bluewater Broadcasting, who is the outgoing chairman of the board for the ABA and a close friend of Alexander’s.

“It was one of his last duties, and he started reading things that sounded pretty familiar in the lead out,” Alexander said. “Just near the end he said, ‘We’ve had two successful partnerships in Montgomery,’ and about that time I started [thinking] wait a minute. About that time, he said my name.”

Alexander got his start in broadcasting at a young age. His parents, Tom and Betty, built their first radio station, WALX, in Selma in 1973.

At the age of 16, Alexander said there was no doubt he would follow in his parents’ footsteps.

“Mom and dad started the radio stations, and I was here as a 16-year-old teenager, and the radio bug bit,” he said.

He was going to go to the University of Alabama to study broadcasting, but when his parents went to the school and met the dean, he suggested otherwise.

“When they talked to the dean and learned how long I’d been in the business … for some reason they changed their mind about sending me up there,” he said.

“One of the things I learned later on was they said the dean said, ‘He already knows what we’re teaching you. I don’t know if it would be a good investment for you.’”

Now known as Alexander Broadcasting, the company has 11 signals. They recently launched a signal in Meridian, Mississippi.

“We really, really believe in the radio business,” said Scott’s son Paul Alexander. “The station in Meridian, we just turned that on the air two months ago, so after 44-plus years we’re still adding signals.”

Paul is the president of the company now and the third generation of the business. Alexander said he’s glad Paul decided to carry on the family tradition after graduating from Auburn University.

“I just told him [Paul] to be happy (and) go do what you want to do. This is here for you if you want it. If you don’t, I’ll be happy with whatever you choose, and we’re very blessed he decided to come back,” Alexander said. “He’s continued the tradition, and he’s doing some amazing things these days for these companies. We’re very proud of him.”

Alexander said the company is always looking for ways to grow, and he can’t wait to see what the future holds.

“I’m just proud of the work that’s been done. I’m very proud of our family and how things have worked out. I couldn’t be happier. The companies are very successful right now and doing very well,” Alexander said.