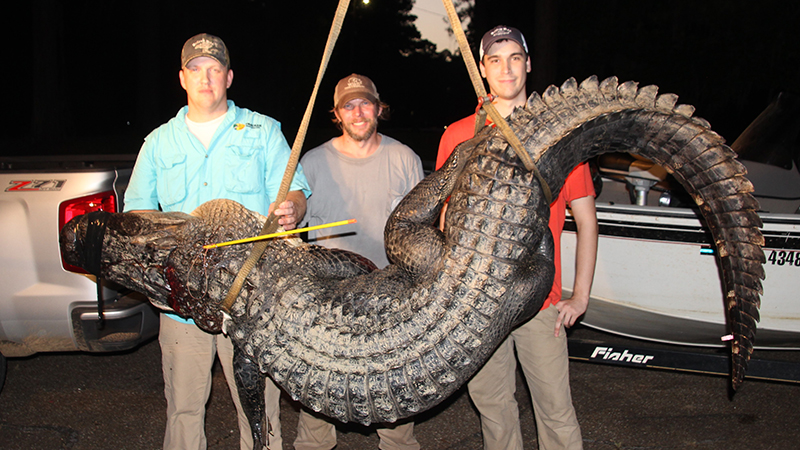 Hunters have one more shot to catch an alligator in the West Central Zone in Alabama this season, but some hunters have already tagged their gator.

James “Big Daddy” Lawler from “Gettin’ Outdoors with Big Daddy Lawler” radio show has been at Roland Cooper State Park each night and morning to see hunters bring in their catch for weigh-in.

A total of 50 tags were issued for this zone, and Lawler said Friday afternoon 18 alligators have been tagged so far, which includes last weekend’s hunt and Thursday night’s.

“It is something that is pretty exciting to the hunters that are lucky enough to draw a tag,” Lawler said. “It’s a pretty big adrenaline rush when you put a hook into a three, four or 500-pound animal and have to secure it to the boat. It’s like catching a marlin fish or a sword fish. It’s a pretty big thrill.”

The biggest gator brought in so far was caught the first night on Aug. 10 by Patrick Stabler from Frisco City. The gator measured in at 12 feet 7 inches and 607 pounds. The second biggest gator was caught Friday morning by Ryan Vick, Chuch Tait and Gaines Neville. Their gator was 11 feet 3 inches and weighed 440 pounds. It was caught at Elm’s Bluff in Dallas County.

Vick said they came across this gator while looking for another the team spotted last weekend.

Vick said the gator put up a big fight before they could bring him in though.

“Once he was hooked he went to the bottom, and he was about 30 feet down,” he said. “He held onto the bottom. He drug [sic] us around for about an hour, and finally, we were able to get him up and get him secured to the boat and able to get a shot on him.”

The third biggest gator caught so far weighed 319 pounds and measured in at 9 feet 10 inches. It was caught by Gary Walters from Millers Ferry.

“It was just perfect timing to be in a great spot,” Walters said. “He was actually eating something off of the bank. His whole top half was out of the water throwing its head back swallowing something.”

Walters said when they got close to the gator, he sank to the bottom, and they waited four nearly 45 minutes for him to come back to the top.

“We sat there again for about 30 minutes, and we finally got a good shot on him,” Walters said. “He ran under the boat, and then it became a cluster for a minute. Everybody was scrambling around trying to stay organized.”

After a two-and-a-half-hour fight, they finally caught him.

“It’s something I’m glad I got to do. I actually put in for a tag last year and didn’t get it,” he said. “I’m definitely hoping I get another one next year because it is well worth taking off work to do that.”

Walters’ crew was made up of himself, Steve Terry, JT Daily and Christopher McGraw.