The Bears tough out the heat to prepare for season opener 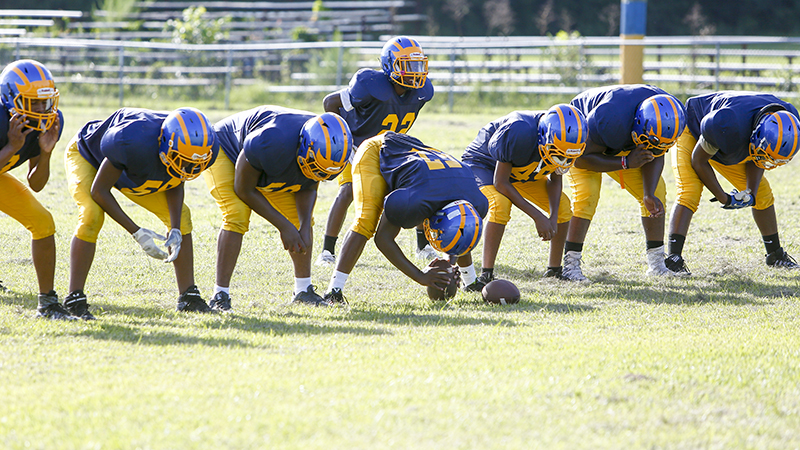 The Keith High School Bears practiced through a 93-degree scorcher Thursday afternoon as they continue to prepare for the 2017 football season.

The Bears hit the field in full uniform and pads right after taking a team picture.

The boys were in a full sweat before they even got into their stretches.

The team was catching up on missed time due to the storms that passed through this past week. While they couldn’t be on the field, head coach Harry Crum had to find alternate ways to prepare his team as it gets closer to the season opener.

“We’re kind of where we want to be, but we had several days where lightning caused delays,” he said. “We’ve had to go later in the day, and some days we had to just do film study.”

Now that the sun is back out, Crum and his team are making sure they cover every facet of the game.

He says that his team is ready to play, but they still need to clean up a few things here and there to improve.

“We’ve gotten on schedule now, and I think the guys have found their rhythm,” Crum said.

In addition to the official practices, several of the boys went to summer conditioning to prepare for the season. The extra work they put in over the summer helped them get a bit of a head start on practice, according to Crum.

One of the challenges in the first two weeks of practice has been getting the younger players ready to step in.

The underclassmen are still getting accustomed to executing their plays at the speed in which they need to operate.

The team has gone through some grueling practices so far and the first game against Winterboro on Aug. 25. Crum is confident that his team will be ready come game day.

“I saw a new spirit in them, even though it was as hot as any practice that we’ve had this summer,” he said.  “After they went through that hot spell, I told them ‘If you didn’t quit today, you won’t quit.’ I thought that was their toughest day, and when they got together it seemed like there was a bond between the team.”