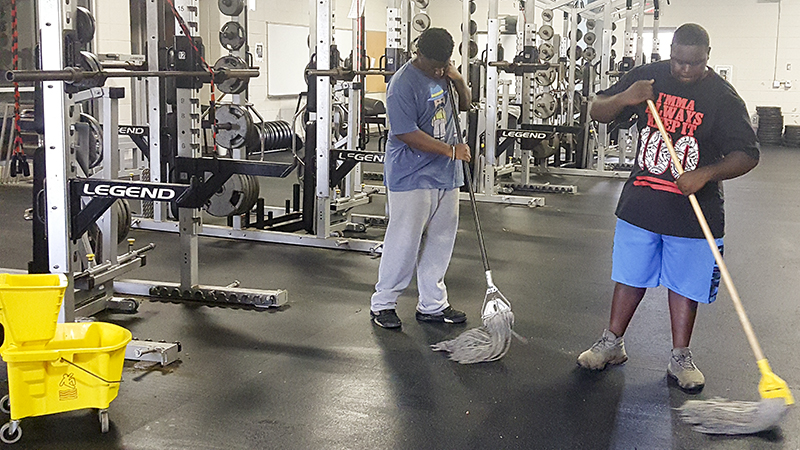 Selma High football players mop the floor together as the team united to clean the field house.

The Selma High School Saints football team woke up early this past Saturday morning to meet with their coaches and other volunteers to clean their own field house.

“It was just something to do for them to take ownership of the building, and let them know that this is your place,” head coach Christopher Raymond said. “We spend most of our time in this building, so take pride in it.”

Raymond orchestrated the mandatory cleaning day two weeks ago with the idea of helping his team bond with one another over a productive task. More than 60 kids showed up to help, according to Raymond.

“We are rebuilding, re-branding and reconnecting our team this season,” he said. “Our guys are not just working on being a team on the field, but we are working with them to help them gain team pride, improved focus and to try to help them understand the importance of leading by example.”

The players arrived at 9 a.m. and spent the morning mopping the floors, dusting the walls, cleaning the bathrooms, emptying the trash and organizing the school’s field house.

When the cleaning was done, everyone involved socialized late into the afternoon.

They were done cleaning around 11 a.m., according to Raymond, but everyone stuck around until approximately 6 p.m.

Raymond also took this opportunity to learn more about his players. He observed them throughout the day and is continuing to learn about his team.

“Some of them are harder workers,” he said. “You have some that still want to cut corners, but it’s about taking about taking pride and showing that you’re a willing team player.”

Raymond, who was hired late in the summer, is getting acclimated to his new team.

In addition to preparing them for the upcoming season, he is finding ways to make the team a tighter unit.