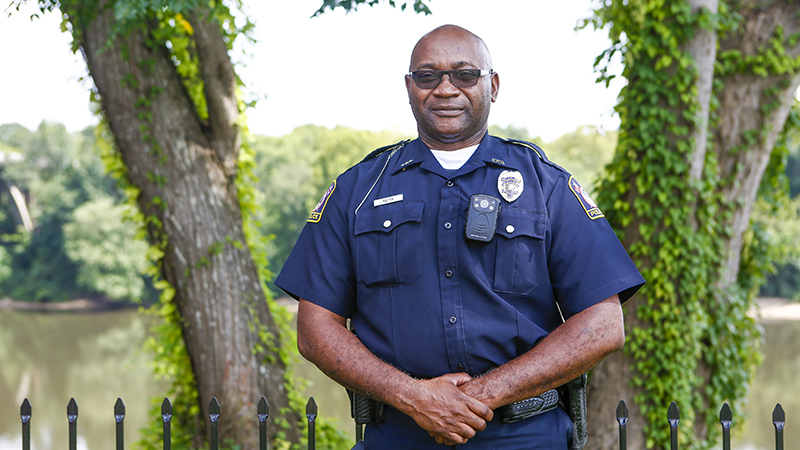 Kenneth Keith, a policeman with the Selma Police Department, has served the city for nearly 12 years. He is a patrolman and a school resource officer in the Selma City School System.

Sunday while working security at a local business Selma police officer Kenneth Keith decided to help out some teenagers.

The group of four teenagers tried to steal a $4 pair of earbuds, but Keith caught on and decided that he would rather help than send them to jail. He bought the earbuds, giving a life lesson to the teens.

“I know how it is coming up with nothing, and these are kids that are coming out of the poor neighborhoods that don’t have anything,” Keith said. “So instead of arresting them, I would rather help them. When you help them, that shows them that you don’t have to steal, you can ask people for help.”

Keith said he hopes helping the kids will show them that there is a better option than stealing.

“I don’t want them out here stealing,” Keith said. “Hopefully, they won’t do this again and if they see somebody else doing this, they’ll say ‘hey, you don’t have to do that. There’s people out here that will help you.’ I’m just trying to guide them in the right direction.”

Keith has been with the department for nearly 12 years and serves as a patrol officer and school resource officer part-time at Selma High School.

Although he waited a while to get into the profession, he always knew it was something he wanted to do one day.

“Ever since I was like 10, I liked blue lights and sirens,” he said.

“So, I figured one day I would be able to get out there and do that.”

Keith is from Orrville and graduated from Keith High School and received his associate’s degree from Alabama State University.

He said he hopes through his work with kids, he’ll be able to show them that police officers are there for them, despite what many people think today.

“Dealing with the kids in school, you try to show them that police are not bad,” Keith said. “We’re the good guys. Any time you get into anything, the police are coming to help you. We try to educate them on working with us.”

Over his nearly 12 years, Keith said he has experienced a lot, but he will always be grateful for his time in the department.

“I’ve never had a dull moment doing this job. I’ve seen a lot of sad days and I’ve seen a lot of happy days,” Keith said. “I couldn’t ask for anything better. It’s not about the money, it’s about helping people. As long as you can help people, that’s the greatest gift of all.”