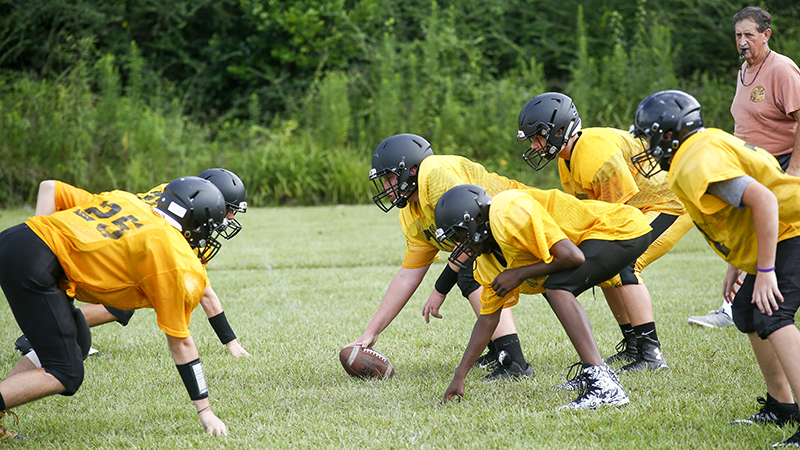 Meadowview Christian Academy is another school that has had to replace a football coach late in the off season, but the Trojans are still hard at work in practice.

“I coached high school football for about 30 years, then I went to administration full time,” Blair said. “To get acclimated, I started watching some videos on what our team did, and we just went back to the basics of what I knew.”

Blair took over the program in July just a few weeks before school started.

He hardly had an offseason with his new team, and the team wasn’t able to attend any camps.

Since Meadowview Christian is a private school, Blair was able to compensate for some of the lost time by starting practice a few weeks earlier than usual.

“Our guys worked out all summer,” Blair said. “We all started from ground zero. They’ve had an opportunity to practice already, so it’s not new.”

The Trojans played six-man football last season, but will move up to eight-man football this year. Adding an additional lineman and skill player makes all the difference for the team.

The Trojans will be working with a 16-man roster this season. Conditioning will be important for the Trojans since they will still be playing the full length of the football field.

Earlier this week, Blair focused on position drills to work on the fundamentals. On Wednesday’s practice, the team scrimmaged against each other for a live look at how their plays will work.

He has had his team working for three weeks now, and the main obstacle has been making sure that he and his players are on the same page with the play call language.

Blair says his teams understands the concepts he is teaching, but it’s a matter of communicating it to them in a way that they can understand him.

They will be running plays similar to what they did last season, but Blair says they may be using different calls to talk about the same thing.

“We had to learn to block, tackle and simplify the game to where my guys understand my terminology,” he said. “That’s probably the hardest thing that we’ve had to do.”

The team will travel to Montgomery on Friday for a preseason scrimmage before the season starts the following week.