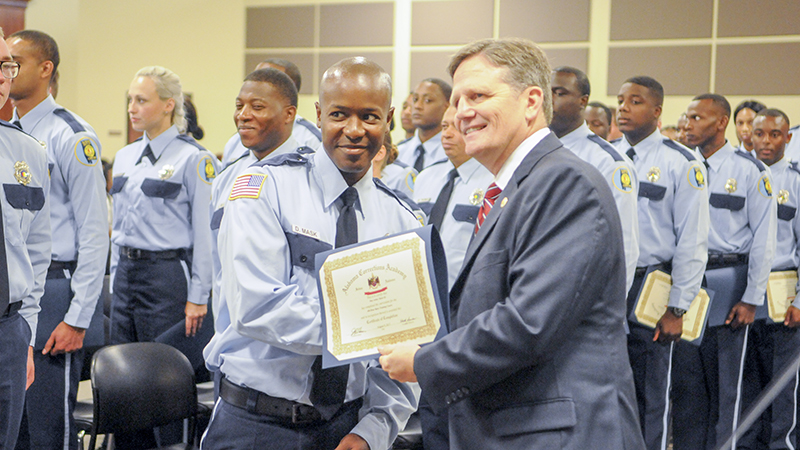 Dan Mask, one of 42 graduates from the Alabama Criminal Justice Training Center, receives his certificate from Commissioner Jefferson Dunn Wednesday.

After going through a 12-week training course, the newly sworn-in officers will head to correctional facilities across the state of Alabama.

“It’s one of the best feelings in my life,” said graduate Walter Thomas. “To be my age and to start this new career and to actually get to work on Monday morning is going to be a challenge, but I’m really looking forward to it.”

Thomas, who is 46 years old, will report to Staton Correctional Facility in Elmore on Monday morning to start his new career as a correctional officer.

“It’s a great feeling, especially to be on the corrections side this time. To get the whole picture of law enforcement is pretty good,” he said. “I just want to thank my family and my wife (April) for supporting me because without them I couldn’t have done it.”

LaCorey McLemore, another graduate in class 2017-02, said he decided to be correctional officer because it is career he can grow in. McLemore is also a member of the Army National Guard.

“The jobs that I was working they weren’t actually making ends meet as far as I wanted them, and when I thought about it, when I do choose a career, I want it to be something I can actually grow with,” he said.

McLemore will report to St. Clair Correctional Facility in Springville.

Elliott Sanders, director of training for the Alabama Department of Corrections, said he is proud each time he sees a class graduate.

“Every time a class graduates I see the future of the department. They will be years down the road the future of this agency,” he said. Sanders said the officers go through a rigorous 12-week program.

The academy first moved to Selma in 1977 and was located on Craig Air Force Base. It moved to the Wallace Community College Selma campus in 2010.