Felecia Lucky will be speaking at historic Brown Chapel A.M.E. Church during their annual Faith, Family and Friends Day Aug. 6.

Felecia Lucky is the president of the Black Belt Community Foundation. The foundation was established to support community efforts that contribute to the strength, innovation and success in Alabama’s 12 poorest counties — the Black Belt. 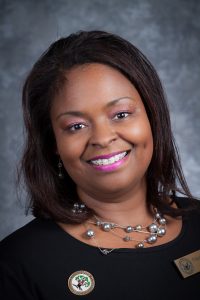 As executive director of the foundation, Lucky said she values regular input from the communities and works diligently to strengthen the communities in the areas of the environment, health and human services, education, youth, arts and culture, and economic and community development in an effort to transform Alabama’s Black Belt.

Luck was born in 1969 in Livingston. A product of the Sumter County Schools, Lucky excelled in academics including earning a bachelor of science degree in accounting from Tuskegee University and a master of business administration degree from the University of Alabama.

Prior to serving as president of the foundation, Lucky worked as an internal auditor in Minneapolis, Minnesota and as an accounting supervisor in Memphis, Tennessee for Cargill, Inc.

Lucky then returned home to Alabama to serve as executive director of the Sumter County Industrial Development Authority. This position provided an opportunity for Lucky to affect positive change in her home county.

In an effort to paint an accurate picture of the region that is often described as desolate, she partnered with the University of Alabama to launch the Black Belt 100 Lenses Project where the culture of the Black Belt was depicted through the eyes of its youth. Through her work, Lucky believes strongly in building stronger community with residents of the community, not for residents of the communities.

She is a graduate of both Leadership Alabama and Leadership Sumter County.

Lucky is also a 2006 Southeastern Council on Foundations Hull Fellow, a 2013 Aspen Ideas Scholar and a 2016 graduate of the Delta Regional Authority’s Delta Leadership Institute.

The service will begin at 10:15 a.m. and the church is asking for friends and family to attend.