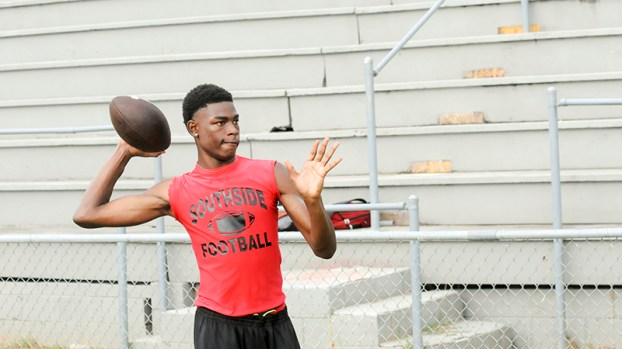 The first day of football practice is less than two weeks away and Southside High School hosted a seven on seven mini-camp Thursday afternoon to get some extra work in before school starts.

Two weeks ago, Southside head coach Daniel Flowers took his team to the seven on seven camp in Autaugaville.

Even though they played well there, Flowers wanted to squeeze in another camp before the schools are allowed to go to full pads.

“I wanted to see our progression,” he said. “We went to Autaugaville two weeks ago, and the kids played lights out. I wanted to see how they were going to respond when they played better competition.”

Francis Marion, Hale County, Monroe County and Keith High School responded to the invite and traveled to Southside for the exhibition games.

On short notice, Flowers said it was hard to get the teams lined up for his camp.

It was difficult because I called a lot of schools,” he said. “These schools that came today are the ones that answered the call. I told them they were going to see some great athletes.”

Even though it was last minute, Flowers was glad to see that the schools that did come were ready to compete.

Two games ran at a time on opposite ends of the field with a 20-minute running clock. The odd team out rested until their next match-up.

Points were awarded for touchdowns, interceptions and turnover on downs.

Since practice hasn’t officially started, players were limited to just helmets and no hitting.

A few games were played helmet-less and a two-hand touch was good enough to down the ball-carrier.

The quarterbacks focused on making their reads while their half-backs and receivers worked their routes against the opponents secondary.

The defensive backs and linebackers worked on different coverages and ball pursuit in their attempts to stop the offenses.

The entire time coaches barked out plays, critiques and encouragements to help motivate and instruct their athletes.

The cloud coverage provided little relief from the heat. Flowers said the boys still competed at a high level yesterday.

Receivers and defensive backs battled for every jump ball. The athletes celebrated their successes and showed frustration with their miscues on each drive.

In addition to improving their respective games, the players and coaches are also playing for bragging rights according to Flowers.

Even the smallest victories carry over until the coaches and players face each other again. Next time, however, will most likely be in pads.

By JUSTIN SMITH | The Selma Times-Journal Yulonda Randolph believes that technology is one of the most important things in... read more