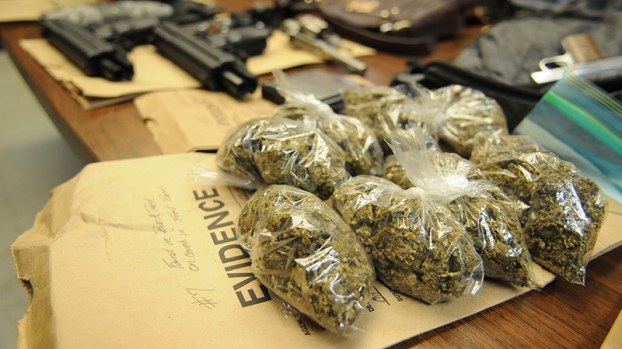 Marijuana and guns were recovered from a home in the 1400 block of Lauderdale Street on Tuesday. Officers went to the home to serve a warrant but ended up making six arrests after finding the drugs.

The Selma Police Department went to a home on the 1400 block of Lauderdale Street Tuesday evening to make one arrest, but instead they arrested six people allegedly involved in a drug operation.

Selma Police Chief Spencer Collier said officers with the department’s Crime Suppression Unit went to the home to serve an arrest warrant for 30-year-old Eric Jackson for attempting to elude a law enforcement officer from an incident that happened several weeks ago.

“Upon approach, officers, including myself, spotted Jackson in a rear side door opening the door attempting to leave,” Collier said. “Of course, once he spotted us, he shut the door [and] fled back into the home.”

Officers could hear several people inside the home moving around and eventually ordered everyone outside.

“During the wingspan search we spotted in plain view narcotics and there was a very strong smell, as you can smell here today, of what we perceived to be marijuana,” Collier said. “Additionally, there appeared to be burning marijuana.”

After receiving written permission from the homeowner to search the house, officers found drugs, drug paraphernalia, guns and money.

“[We found] multiple bags of marijuana packaged to sell. A lot of the marijuana was located actually with cash throughout the residence,” Collier said. “Additionally, six weapons were located. The majority of those weapons were located inside of a purse that was thrown in a dryer in the rear of the home.”

“We don’t think this is a new operation, but it’s a pretty thorough operation,” Collier said.

Collier said the department is looking to arrest two others in the case – Derrick Dixon and Cedric Jackson, who are both believed to be in their twenties.

“There may be pending charges on the firearms,” he said. “Of course, we’ll have to determine their status and also determine the status of the individuals in possession of the pistols.”

Collier said the way the marijuana was packaged shows there was some sort of alleged drug operation going on.

“The way you see it is the way we recovered it – clearly packaged to sell,” he said. “Some of it actually was recovered in jars with money. Clearly it was a selling operation.”

The officers also found ecstasy pills, several scales and even a police scanner.

“After being there for several minutes and each of us telling the other ones to turn your radio down, we realized they actually had a scanner,” he said. “Fortunately, we didn’t call out before we exited to serve the warrant.”

Collier said finding drugs at the home was not surprising after recent complaints from people in the neighborhood.

All Stars honored at banquet

One by one, members of the Selma 15U All Stars were introduced during a banquet in their honor Wednesday afternoon.... read more