Jeffrey the Ghost gets permanent home 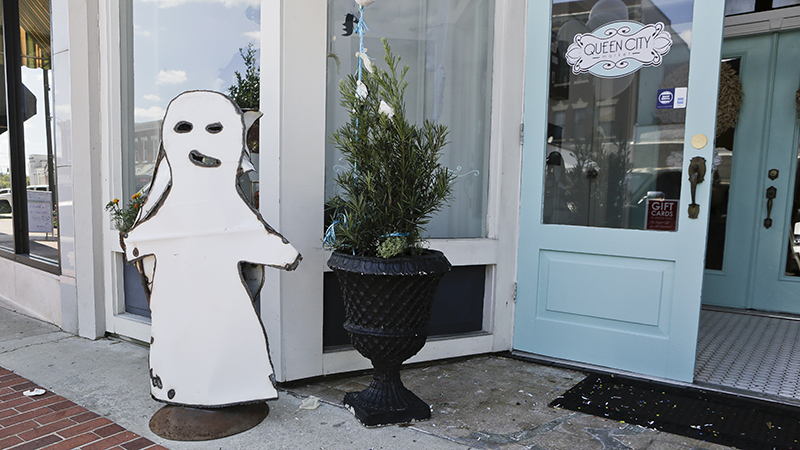 Jeffrey the Ghost will soon have a permanent home in Selma.

The sculpture, created by Charlie “The Tin Man” Lucas, was made last year to promote downtown and get people out to the shops, but he is now ready to settle down.

“The idea was we had this great sculpture by the Tin Man that several people downtown worked hard to make happen,” said Clay Carmichael, president of Main Street Selma. “The whole point was to eventually find it a permanent home.”

Main Street Selma came up with the idea for Jeffrey after seeing other towns promote their area with a sculpture that people can take photos with and post on social media.

As Halloween approached last year, they moved the sculpture around each day in October and had people take photos with it and post to Instagram and Facebook with #jeffreytheghost, #mainstreetSelma and #alwayshome.

“In October, Jeffrey haunted downtown and bounced around from store front to store front and people could go and take their picture with Jeffrey,” Carmichael said.

They held a drawing at a Halloween party for people that had participated in the Jeffrey hunt and a winner was chosen to win a basket full of items from various Selma stores.

Jeffrey the Ghost comes from the tales of Kathryn Tucker Windham who said Jeffrey haunted her home in Selma.

Windham was known for her series of books on ghost stories across the South, including “13 Alabama Ghosts and Jeffrey.” The sculpture itself was made from Windham’s washing machine.

After spending some time near Side Porch Sandwiches, Jeffrey will now be placed in a parking lot close to the Selma Welcome Center.

Carmichael said he hopes people will take photos with the sculpture and that they find joy out of seeing it while they are in Selma.

“One day not too long ago I was headed home from work and there was a bus stopped where Jeffrey is sitting right now, and there were people taking photos with Jeffrey. I stopped my truck and ran over there and told them the story,” Carmichael said.

“It was pretty cool because their first instinct was to take a picture with the sculpture and that’s actually what we made it for.”