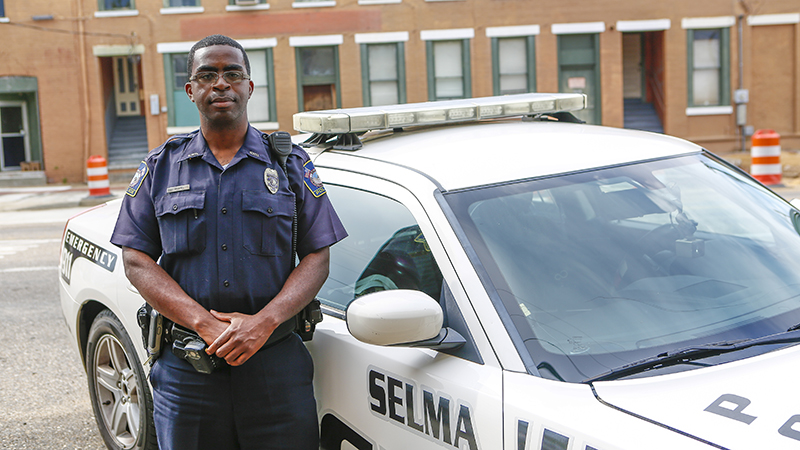 Brodrick Givan, a patrolman with the Selma Police Department, has been serving the city of Selma for nearly four years.

Patrolman Broderick Givan with the Selma Police Department didn’t know growing up that he would one day be serving the city that he grew up in. He said 10 years ago, he could have never seen himself being a police officer, but now he wouldn’t change it.

“It just came about,” he said. “Someone recommended for me to come to the police department. It really wasn’t a dream, but I love it. I enjoy it.”

Givan has now been on the force for nearly four years serving as a patrolman, answering calls from all over the city.

He is a Selma native, and graduated from Southside High School in 2004 before attending Wallace Community College and Auburn University Montgomery. He is currently taking classes at Faulkner majoring in forensics psychology and has plans to further his career in law enforcement.

“I love what I do,” Givan said. “It’s not all about arresting people. We keep the peace too.”

Givan said he never knows what his day will bring, but he has to be ready for everything.

“As a patrolman, we get domestic calls, accident reports, snakes in the garage,” Givan said laughing. “That’s part of being a smaller department.”

He said although most people feel like all he and his department do is arrest people, that’s not all there is to policing.

“Some people say we’re like psychologists too,” Givan said. “We’ll sit there and talk to them sometimes if they need counseling. It’s not all about arresting people. There’s a lot of ways that they need us. We need them too, for information to solve crimes.”

Givan said first responders of all kinds are very needed in the community, and he hopes that people will realize how much they mean to the public. Although some police officers have earned a bad name for themselves, Givan said he hopes people realize not all officers are that way.

“There’s bad people in every position, but it makes it hard for us when you see an incident on the news and they classify all of the officers as the same and we’re not.”

Overall, Givan said he is just happy to do a job that he enjoys and make the city a safer place.

“When you have that one person that you catch and you know that they need to be behind bars, it makes you feel good,” he said.

Jeffrey the Ghost gets permanent home