Community comes out to greet All Stars at Bloch Park 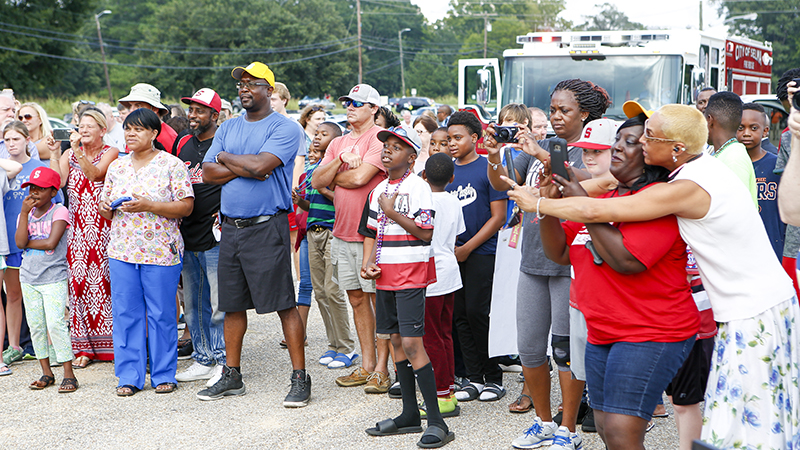 Fans came out to Bloch Park on Monday to welcome the 15 U All Stars back to Selma.

The 15U Selma all stars received a hero’s welcome as they returned home to Bloch Park on Monday escorted by police cars and fire trucks to celebrate their Dixie Baseball World Series championship. 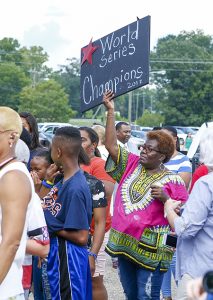 Jennifer Bean holds up a homemade sign welcoming the 15U All Stars home.

The team pulled into a full parking lot of more than 100 community members eager to shower praise upon their athletic ambassadors. They shouted, waved and held up signs congratulating the all stars on a job well done.

Head coach Ricky Waters said his players had an idea something special was waiting for them in Selma.

“They kind of felt they would get a little something, but not of this magnitude,” he said.

Kids from the younger Selma all star teams came out in their jerseys to celebrate their older counterparts.

Parks and recreation director Terry Jackson was proud to see the team return to Selma with its first championship since 1972.

Family members of the team also came to show their support waving signs for their players. Jennifer Bean and her family held up multiple signs for catcher Xavier Green. She had one that said “Way 2 Go Selma,” and another that read “World Series Champion.”

Bean said she was “overjoyed,” knowing how far this team had come to achieve their goal.

Andrew McClure is the youth minister at Shiloh Baptist Church, and he brought his family with him to celebrate the all star shortstop in his youth group, Joseph Estes.

“We’re really proud of him, and we’re fortunate to have him in our youth group,” McClure said.

McClure also stated that his son, who played for the 10U Selma all stars, was excited to see the older team come back with a trophy.

Waters and his team greatly appreciated seeing so many people come out to welcome them home.

“It was outstanding to have a turnout like this,” he said. “What a great community to be a part of. Nothing felt better for these boys than to feel the welcome home they got today.”

The players enjoyed their welcome home celebration, and couldn’t stop smiling from the moment they stepped out of their cars.

Second baseman Miles Turner was glad to see so many people came to support the team.

“This is what it’s all about,” he said. “This brings everybody together. It’s amazing.”